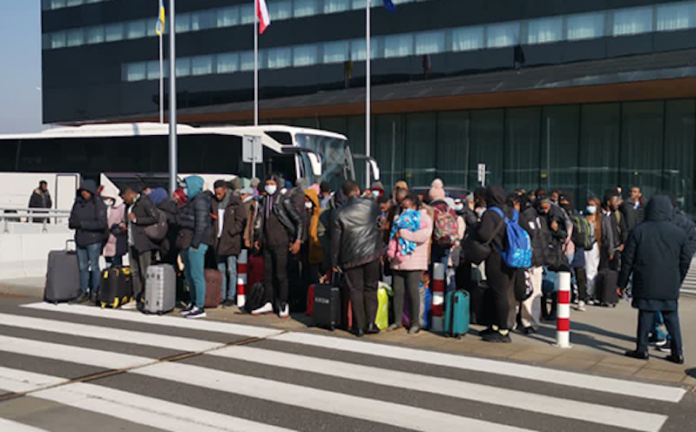 The authorities of Chopin Airport, Warsaw, yesterday cancelled the evacuation flight that was expected to bring in from Poland the first batch of Nigerians that escaped the on-going conflict between Ukraine and Russia. The plane was to take off from that airport.

In continuing reactions to the conflict, particularly by Western countries and institutions, the International Monetary Fund (IMF) and the World Bank Group yesterday declared support for the people of Ukraine and decried the war raging in the country that has caused devastating human and economic consequences.

The flight meant to evacuate stranded Nigerians was cancelled because the aircraft overstayed its allotted duty hours. The crew that operated the Air Peace flight from Nigeria to Poland had spent their allotted hours of duty and, according to international standards, they could not exceed the allotted hours.

Flight and Duty Time Limitations (FTL) recognised by the International Civil Aviation Organisation (ICAO) is the rule, which ensures that aircrew fatigue does not decrease flight safety.

Since most aviation incidents and accidents are result of human factors, fatigue is taken into account as a major factor, which also contributes to the human error. Therefore, fatigue of crewmembers has been an issue in civil aviation since the 1944 Chicago Convention.

The Nigerian evacuation flight was shifted to early today morning and it was expected to arrive the Federal Capital Territory, Abuja, later today.

Ambassador Bolaji Akinremi, who arrived Poland with the Air Peace flight, disclosed this.

Akinremi explained to Arise TV, “The reality is that the flight has been rescheduled to tomorrow (Friday). The main reason is because of the delay during the check in because they have to gather them together from different hotels and by the time we would be ready after the check in, the crew that had been waiting since 9:00 am overshot their duty hour, which is allocated to them.

“They have waited from 9am to 2pm. It means they have already waited five hours and they are going to have nine hours flight. That is already more than the standard allowed. So the authorities of the airport said they won’t allow us to go.

“So we have to come down. But arrangement has been made to ensure that we all stay together in the same hotel and we will leave very early tomorrow, 4am with the bus so that we can join the flight early.”

The Nigerian Ambassador to Poland, Christian Ugwu, who was visibly worried over the postponement of the flight, attributed the delay to the unruly behaviour of some Nigerians who could not prepare quickly to board the flight, but also expressed optimism that the flight would take off today.

“I am very sure by tomorrow morning the flight will take off,” Ugwu said.

The information gathered that before the flight was cancelled, passengers had been allowed to board and they had all been stamped after passing through security. They were already in the aircraft before the airport authorities announced the cancellation, so the evacuees had to de-board.

However, about 1,500 Nigerians may be missing as out of the 2,222 that were received only about 600 could be accounted for.

Arise News reported, “Nigerian authorities, the Nigerian embassy here in Poland, said they only had a count of 600. But it seems at this point, there are more than 1,500 Nigerians, who are missing.”

On Wednesday, President Muhammed Buhari announced the approval of $8.5 million for the evacuation of about 5, 000 Nigerians who had moved from Ukraine to neighbouring countries where they were expected to be evacuated from.

The Ministry of Foreign Affairs had arranged the evacuation of Nigerians from Ukraine’s neighbouring countries.

The chartered flights were initially arranged to depart on Wednesday, to bring the first batch of Nigerians home on Thursday.

The following Nigerians, according to the Ministry of Foreign Affairs records indicated that evacuees received by Nigerian embassies at Hungary were 650 persons, Poland 350 persons, Romania 940 persons and Slovakia 150 persons.

The first batch of evacuees was expected to arrive Nigeria on Thursday, March 3, 2022.