Is The Queen Of Sheba (Bilikisu Sungbo) Buried In Ijebu? 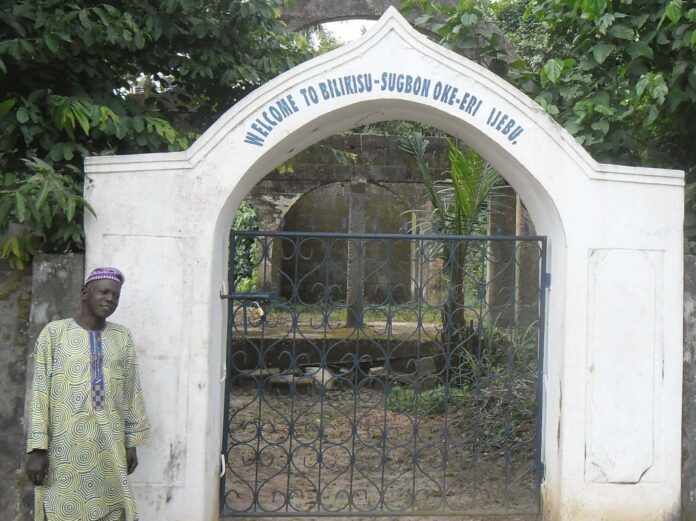 For years, Historians were trying to figure out where the Queen of Sheba came from and where she died. They were sure that she did exist, but there was little in written history that talked about her as a person, and where she died.

The curiosity about where her kingdom was, as well as her place of death, led an Archaeologist; Dr. Patrick Darling and his team from the University of Bournemouth to Ogun state, Nigeria.

They affirmed in 1995, that the legend of Bilikisu Sungbo, who is worshipped by the people of Oke-Eri in Ijebu, was in fact, the Queen of Sheba. And the burial site of the Mystical Queen was in that same town.

It has since been added to the tentative list of UNESCO World Heritage Sites.

The tradition of the people of Oke-Eri

Oke-Eri is a small Muslim community in Ijebu. People come to this community every year for pilgrimage to the late Oloye Bilikisu Sungbo, the woman they strongly believe to be the Queen of Sheba from the Holy books.

the Queen was originally from Ethiopia. She lived there before she came to settle in the ancient Ijebu Kingdom and she inspired the creation of one of the largest fortresses in ancient times; Eredo.

The Eredo is a fortress, a system of defensive walls and ditches that is located to the southwest of the Yoruba town of Ijebu Ode in Ogun State. It has been proven that the amount of sand, unearthed from the ground to form this ditch, is more than the quantity used to build the pyramid of Giza in Egypt.

She was childless but very wealthy. She traded in gold and spices that brought great civilisations to Ijebu land.

After the Queen got married to Solomon, the King of Israel. She returned to Ethiopia to give birth to his son, Menelik I.

When he was of age, she returned to Ijebu land, where she eventually died. But not without a curse.

There are a couple of myths associated with the death and burial ground of the Queen.

1. Women are not allowed to see the graveyard.

The Queen placed a curse that no woman should have the privilege of seeing her grave after her death.
Apparently, when she wanted to receive King Solomon, who promised to visit her, she told the women that she had a son and King Solomon was coming to visit. But none of them believed her, and when the King failed on his promise, they continued to mock her that she was childless.
For this reason, she hated women till her death.

2. Shoes are not allowed

No one is allowed to walk in with shoes, because it’s a holy ground.

3. No vegetation grows around her grave.

This site was right in the middle of the forest. There was vegetation everywhere but around her graveyard.

She was indeed, a powerful woman.