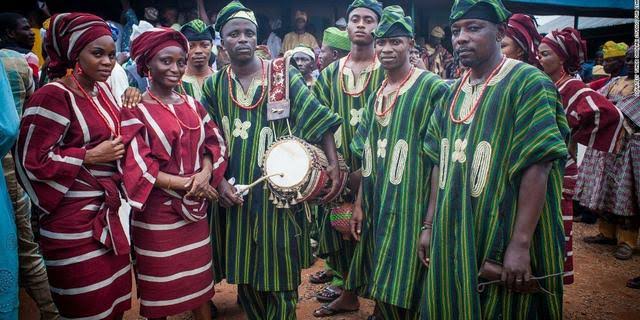 From why a pregnant woman should have safety pin attached to her dress to why a person shouldnt drink coconut water, check out some funny Yoruba beliefs.

Yoruba is one of the numerous tribes in Nigeria.

This ethnic group, like every other ethnic group, are known for their religious as well as cultural belief and traditions some of which are funny and nothing but just myths and superstitions (if you ask me).

1. Pregnant women must attach safety pin to their clothes

Yorubas believe that it is wrong for a pregnant woman not to attach safety pins to her clothes. That way, she is merely inviting spirits to possess her unborn child.

The safety pin (like the name goes), sort of protects the foetus and keep it safe from the spirit roaming about.

2. It is wrong to play with an umbrella when it isn’t raining

A person who plays with an umbrella when it isn’t raining is only inviting a non-stop rain on his/her wedding day.

3. Do not whistle at night

When you whistle at night, you’re simply calling on snakes and other reptiles into the house.

If you want white fingers, all you need to do is sing a song calling on egrets (leke leke) to give you white fingers.

5. A pregnant woman shouldn’t walk under the sun

As believed by the Yorubas, when a pregnant woman walks under the sun (especially around 1 pm), she’ll give birth to a disfigured child. So, pregnant women are advised to stay away from the sun.

6. Don’t beat a male child with a broom

The Yorubas believe that when you beat a child with a broom, you’ll render him impotent.

According to their belief, when a person drinks coconut water, the person will become dull.

8. Do not look at a mirror at night

According to the belief of the Yorubas, it is wrong to look at a mirror at night because, instead of seeing your reflection, you’ll see a ghost.

9. A piece of thread can magically stop hiccups

This works well with infants, according to their belief. When an infant is experiencing hiccups, just put a piece of thread on the child’s head to stop the hiccups.

10. Do not cross over a person and vice versa