HomeDid You Know About The Igbo People Of Jamaica?
Featured

Did You Know About The Igbo People Of Jamaica? 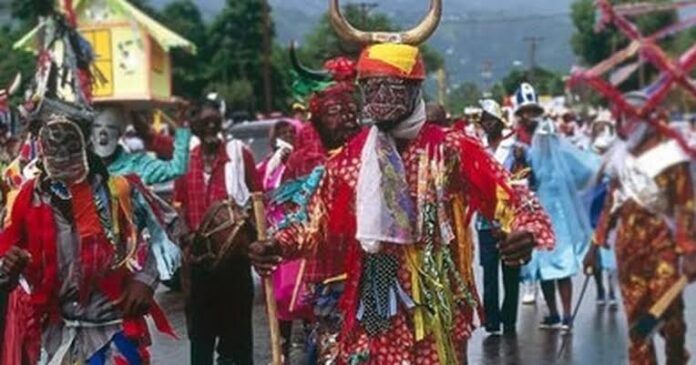 Igbo people were taken in relatively high numbers to Jamaica as slaves, so its no surprise that theres some Igbo language in the Jamaican Patois language.

The “Red Ibo” or “Red Eboe” was used to refer to the Igbo slaves in Jamaica because of their light skin. Igbo slaves were distinguished physically by their fair or “yellow” skin tones, a stereotype which persists to present-day Nigeria. Today, in Jamaica, “red eboe” is used to describe people with light skin tones with African features.

Originating primarily from the Bight of Biafra in West Africa, Igbo people were taken in relatively high numbers to Jamaica as slaves, between 1790 and 1809 during the transatlantic slave trade. Besides Virginia, Jamaica was the second most common disembarkation point for slave ships arriving from Biafra.

Some of these words include:

Also, the yam festival, Jonkonnu, in Jamaica, was introduced by the Igbos. In Nigeria, it is simply called the New Yam Festival. Jonkonnu is a masquerade festival held in Jamaica which is attributed to the Njoku Ji or “yam-spirit cult”, Okonko and Ekpe of the Igbo. Natives also allege that the Ibu Town is named after the Ibo slaves.

The Igbo also influenced the culture with actions such as “sucking-teeth” coming from the Igbo “ima osu” and “cutting-eye” from Igbo “iro anya”.

According to the Guardian, “From Jamaica’s history, the Igbos influenced the culture, music, the pouring of libation, the “ibo” style, idioms, language and way of life of the Jamaicans. The Jamaicans are so akin to the ways of the Igbos such that it is not uncommon to see Jamaicans watch Igbo Nollywood movies. Some of their rural areas take after the Igbo’s in Eastern Nigeria.”

We cannot talk about Igbo slave history without talking about Olaudah Equiano, a freed Igbo slave who became literate and was one of the first to document his experiences in a book. He became an official and was very instrumental in maintaining law and order among the Igbos in Jamaica during the 1776 Mosquito Shore Scheme. He is also regarded as being one of the campaigners of the abolition of slave trade.

From history, Igbo slaves were known to resist enslavement rather than revolt. Many accounts showed that the slaves committed suicide because they believed after death, they would return to their native land. This suicide made most slave traders sceptical of having them as slaves.

One of the most popular resistances is the Igbo Landing, where about 75 slaves took over their boat and matched back into the water singing and chanting in Igbo. This was in Georgia.

In Jamaica, however, 250 Igbo men conspired to kill every white man in the land with the Black River Rebellion plot. When they failed, their epic song for freedom rang high:

“Buckra” was a term introduced by Igbo and Efik slaves in Jamaica to refer to white slave owners and overseers.