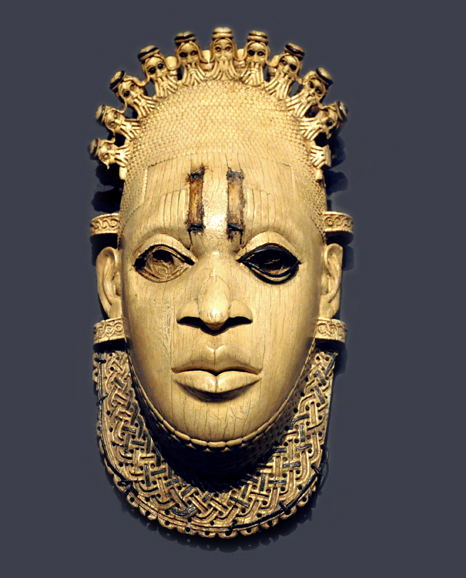 Queen IDIA was born in the 15th Century in Uzeghudu (now Edo State) and was married to Oba Ozolua. Her son, Osawe, was crowned Oba of Benin Kingdom with the title “Esigie” (Oseigie) and he reigned from 1504-1550 A.D.|

Egua-Iy’Oba (The Queen Mother’s Palace) was built for her in lower Uselu.
Till date, it serves as the final resting place for every Iy’Oba (Queen Mother).

Queen Idia enjoyed the privilege of recommending her choice of Chiefs to the Oba who conferred the title on them thereafter.

Queen Idia was the 1st woman who went to and fought in War.

She used her magical powers and knowledge of Medicine to help her son overcome his enemies. She was one of the best known female soldiers ever from the Benin Kingdom. She was a fearless Army General who led the Armies of Benin on several successful battles. One of such was the Idah War of 1515 – 1516 A.D. that was won by her Army who fought very bravely. She also acted as the Oba’s Agent in some Villages.

The use of symbolic images of Art identified with Queen Idia indicates her early contacts with the Portuguese and has become one of the most popular work of Art in World Black History. Several of such images of Art include: the Bronze ancestral Queen-Mother Head, the Bronze Bells, the traditional Sword (“Eben”), the carved wood rattle Staff (“Ukhurhe”), and many more.

The image of Queen Idia is the popular Festac Head that was used for the celebration of the Nigerian FESTAC ’77 Festival of Arts and Culture in 1977 that was attended by dignitaries all over the World.

The Queen-Mother also started “Ekasa” a special dance which forms part of the Royal Ceremonies till date.