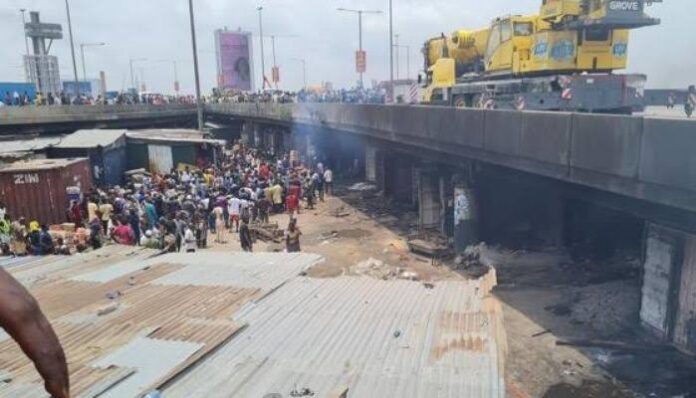 THERE was pandemonium   at  Apongbon area of Lagos Island, yesterday, as fire gutted several shops in a makeshift market, under Apongbon Bridge, extending to Eko Bridge, and left goods worth millions  of  naira destroyed.

The incident led to a chaotic traffic situation, as vehicular movements in the axis was grounded, bringing business activities to a complete halt.

According to a source, the incident happened in the early hours of yesterday.

While there was no record of death, the cause of the fire could not be ascertained  at press time.

Men of  Lagos Fire and Rescue Team who arrived the scene, battled  for  several hours to put out  the inferno.

Consequently, the bridge was blocked and cordoned-off immediately to prevent loss of lives and damage to other adjoining  property.

The bridge was badly affected due to impact of the inferno.

An eyewitness said the fire started at about 2 am before, while  firefighters who were alerted later arrived.

An eyewitness, Mr Musibau Ahmed, said  the mysterious fire quickly spread to other parts of the market.

No record of injury or death—Rescue service boss

Giving an update on the  incident, Director Lagos State Fire and Rescue Service, Margaret Adeseye, said:  “The intensity of the fire has badly affected  Eko Bridge, truncating movement along that corridor.

“The nature of the fire is disastrous but all emergency responders are on top of the situation. There was no reported case of injury or  death .”

Lagos issues quit notice to occupants of shops under bridges

Consequently, Lagos State Government issued a 48-hour notice to owners  and  occupants of makeshift and containerized shops under bridges across the state or face the consequences.

“Failure to heed  this notice will attract arrest and prosecution of defaulters, while enforcement team will demolish any structure found under bridges.

“The bridge has also been shut, pending when integrity and Environmental Impact Assessment, EIA, is conducted on it to determine the level of  damage.

“The fire started early this morning, (yesterday), around 2 am and immediately, we activated our  safety agencies.  Currently, we have the Federal Fire Services, Lagos State Fire Services and LASEMA and with that, we were able to curtail the fire.

“However, while we were working, we noticed that the fire occurred from a container  under the bridge. All these containers under  this bridge have flammable substances.

“We will carry out swift and prompt operation to ensure  there is no recurrence.

“If you look at the history of this place, in the past five years, the state has been telling the traders to move their containers out.

“The damage is enormous, it has affected the bridge. We are going to carry out environmental impact analysis on the buildings around this area, and also carry out an integrity test on this bridge. But thank God, no life was lost.”

Similarly, the Federal Government has given occupants of spaces under its bridges in Lagos State seven days to vacate the spaces or be forcibly evicted.

The Director of Highways, Bridges and Design in the Federal Ministry of Works and Housing, Oluropo Oyetade, who represented the Minister, Babatunde Fashola, said: “All occupants under our bridges, particularly in Lagos, have seven days to quit, starting from today, (yesterday).

“By March 31, the taskforce will begin to forcibly  evict recalcitrant persons. Such persons would also pay to remove their goods.

“By March 31, we will start cleaning up our bridges because if there were no illegal occupants of the space under this bridge, this fire would have been averted.

“Contract for Eko Bridge repairs has just been awarded, the contractor has not started work yet and now this has happened.

“Government cannot keep committing huge resources to maintain infrastructure, while some unscrupulous elements will continue to draw us back by damaging them.

“The enforcement order will also be extended to other states later because we can’t continue to record such cases.”

Lamenting her loss, Mrs Yetunde Sogunro, who sells soft drinks under the bridge, said: “Two of my fridges were burnt. I could not remove them   because I was not around. I don’t even know where to start from. I am finished. I just pray the government comes to our aid.

Also speaking, an estate developer, who has some shops in the area, Mr Taiwo Ilesanmi, said: “Today (yesterday) was a bad day,  though my business was not  affected. Most of the people whose shops were affected collected some items from my shop. How am I going to pay back because I know they cannot pay back? Some of them even took delivery of their goods on Tuesday. It is so sad.”