HomeNsibidi: Do You Know About The Ancient Igbo System Of Writing?
Featured

Nsibidi: Do You Know About The Ancient Igbo System Of Writing? 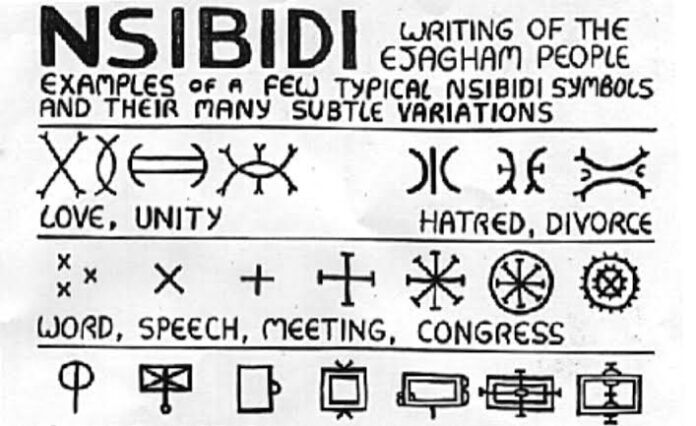 Found in the throne room of the Black Panther movie, Nsibidi was a method of writing in Southeastern Nigeria even before European civilisation came to West Africa.

Known around the world are the Hieroglyphics peculiar to the ancient Egyptian civilisation in Africa, but did you know about the ancient Igbo system of writing known as Nsibidi?

Nsibidi, also known as nsibiri, nchibiddi or nchibiddy, is a system of ideographic writing or symbols indigenous to what is now southeastern Nigeria. The system of symbols is estimated to have been around from 400 to 1400 CE, as the earlier forms of the symbols appeared on excavated pottery, ceramic stools and headrests from the Calabar region.

Nsibidi is a very exclusive system said to have been primarily used by the Ekpe (leopard) secret society, also known as Ngbe or Egbo, found among the Ekoi, Efik and, later adopted by the Igbo people. However, because the largest collection of Nsibidi was found among the Ejagham people of northern Cross River region, the origin of Nsibidi was attributed to them by the colonial administrators.

The western world came to know about Nsibidi in 1904 when T.D. Maxwell noticed the symbols. In 1909, historian and Reverend J. K. Macgregor, who studied nsibidi symbols, claimed in his work, Some Notes On Nsibidi, that the script was traditionally said to have originally come from baboons and was handed down to the Uguakima, Ebe or Uyanga tribes of the Igbo people. This theory was later discarded by historians.

In the colonial era, P.A. Talbot described Nsibidi as “a kind of primitive secret writing”, explaining that it was used for messages “cut or painted on split palm stems”.

J.K. Macgregor’s view was that “The use of nsibidi is that of ordinary writing. I have in my possession a copy of the record of a court case from a town of Enion [Enyong] taken down in it, and every detail … is most graphically described”.

500 Nsibidi symbols have been recorded out of the thousands that are believed to exist. The symbols that deal with warfare and the sacred were taught to secret groups in control of the arms of government, while the many other symbols that deal with love affairs and decorative were commonly known amongst the public, and were once taught at school to children.

Nsibidi is used to decorate calabashes, clothing items, wall designs, metal (such as bronze) sculpture, swords and tattoos on the skin. It was also common with the Igbo uri or uli graphic design. The Ekpe society, which can still found in present-day Abia state, were often seen to wear particular clothing which had the Nsibidi logographic inscribed on it to formal events. This cloth is known as the Ukara Ekpe.

Ukara Ekpe is said to have been woven in Abakiliki and inscribed with the Nsibidi logographic in some Igbo-speaking towns such as Arochukwu and Ohafia in Abia State. The impressions on the ukara have meanings that range from power to wealth status.

Nsibidi in the contemporary world

In the fantasy novel, What Sunny Saw in the Flames/Akata Witch, Nnedi Okorafor referenced the Ekpe leopard society and Nsibidi as a huge part of the plot. On the cover of the novel, the Nsibidi symbol for “love” is drawn on the forehead of the character.

In the epic Black Panther movie, a concept that celebrates the Pan-African movement, Nsibidi symbols were drawn in the throne room of the king, probably to emphasise power, authority and wealth, and was one of the languages that inspired the language spoken throughout the movie.

Because of the Trans-Atlantic slave trade, Nsibidi was transported to Cuba and Haiti where it developed into the anaforuana and veve symbols. Fortunately, those who were taken as slaves to the Caribbean islands still use this writing.