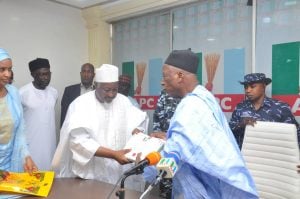 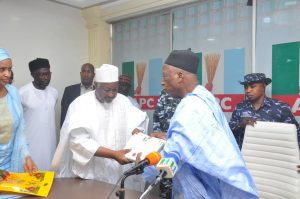 The All Progressives Congress’ newly-elected national chairman, Sen. Abdullahi Adamu, has received the Certificate of Return to commencing his chairmanship role of the ruling party.

Adamu made the declaration on Friday in Abuja following the receipt of the certificate by the Jigawa State Governor, Muhammad Abubakar, who was the Chairman, Election and Planning Sub-Committee of the party’s March 26 national convention.

Adamu, upon his assumption of office on Friday, stated that the party would not cower to whatsoever failure in the new regime of party leadership.

He said, “We have zero tolerance for failure in this new dispensation of our great party because we have an enormous responsibility ahead”.

“On the 2023 general elections, we cannot move the way we are to the election. We have a marching order from the leader of this party, President Muhammadu Buhari, we will have to deliver.

“There will be no excuses whatsoever, and we need every hand on deck for this to happen,’’ he affirmed.

He commended Gov. Abubakar’s committee for conducting the election in an efficient, honest and equitable manner.

“We would be explicit and we will be talking to you particularly to talk to the Progressives Governors’ Forum and through you to the forum’s chairman,’’ he said.

“We will need your services from time to time and it is my hope that when we get to that point, whoever amongst you we call, will please come and join us to get us over certain situations.

“We will find you as ready partners,’’ Adamu said, adding that he was a team player and was ready to work with the newly-elected National Working Committee members.

“I am a team player; as much as possible, I want to carry everybody along with me but to work with me, not because I’m the best and everything, you have to be loyal, not just to me, but to the party. You have to recognise the authority of the party.

“In all that we do, the interest of the party is paramount,’’ the national chairman stressed.

Jigawa Gov. Abubakar also thanked the contestants during their long-suffering strifes at the convention, for comporting themselves in the most decent manner and in the interest and progress of the party, adding that they were heroes.

“Despite their personal interests, they chose to withdraw to allow for consensus so that our party will come out stronger and indeed this was what happened.

“I thank them and I believe they deserve all our commendations and the party will never forget them,’’ Abubakar remarked.