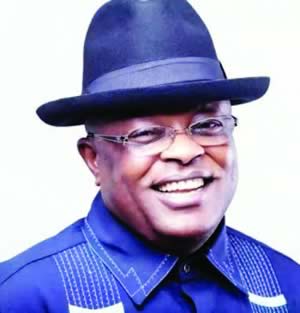 A chieftain of the Peoples Democratic Party, in Ebonyi State, Chief Abia Onyike, has said that the Enugu Appeal Court judgement, on Friday, that dismissed a suit seeking to remove Governor David Umahi and his deputy, Kelechi Igwe, from office, is merely diversionary.

According to him, the noise over the judgement should not be taken seriously as the main issue at stake was the judgement of the Abuja Federal High Court, presided by Justice Inyang Ekwo, that sacked the governor and his deputy from office.

He argued that the current scenario presented two different issues, saying the PDP was only interested in the particular matter between it and Governor Umahi.

Onyike stated this during a telephone interview with our correspondent in Abakaliki on Friday.

According to him, this one particular case that is being touted about by the government is not the main case. It is the verdict that was given by the Federal High Court Abuja, presided over by Justice Inyang Ekwo.

“This appeal is quite a different one. So, let us wait for the judgement of the Appeal Court, in the case of PDP vs Governor David Umahi, in which the Federal High Court ruled against Umahi, and which made them go to appeal.

“So, that’s the one we should be looking for and not this other one. This is merely diversionary. The parties are not the same.

“The argument is that any governor who defects from his party to another party, he stands to leave his office. This is because the mandate given to that governor is for the party. And then if he wants to leave, he should, first of all, resign his office.

“But in this other one, the governorship candidate of the APC in 2019, Senator Sonni Ogbuoji, took Umahi to court, arguing that in respect of the ruling which nullified his continuous stay in office, they should be allowed to take over from Umahi. So, these are two different issues. And it’s important that people understand it

“The Governor himself, I mean Umahi, knows that this one is just a diversionary matter. The main issue is pending at the Court of Appeal in Abuja. This is not the main issue. Let them go and work hard to see whether they can set aside the judgement of the Federal High Court, presided by Justice Inyang Ekwo, in Abuja. That’s the main issue. So, there is no cause for alarm.”