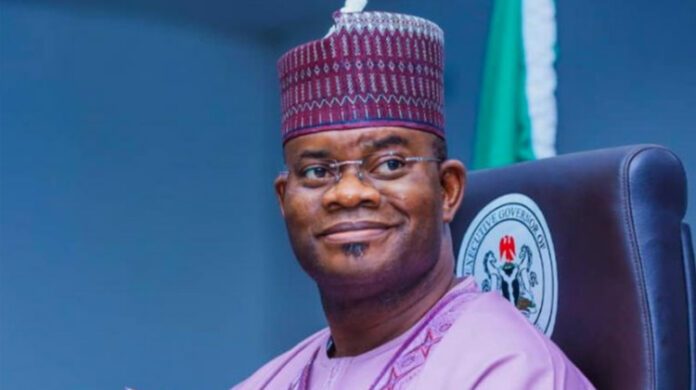 Governor Yahaya Bello of Kogi State on Saturday formally declared to run for the Presidency in 2023 under the platform of the All Progressives Congress with a promise to make 20 million Nigerians millionaires by 2023.

The governor made the declaration at an elaborate event at the eagles square in Abuja witnessed by many dignitaries including, Deputy Speaker of the House of Representatives, Idris Wase; Kogi state Deputy governor, Edward Onoja; former Aviation Minister, Femi Fani-Kayode among others.

Hafsat Abiola-Costello, daughter of the presumed winner of the June 1993 presidential election, late Moshood Abiola, has been named to lead the governor’s presidential campaign organisation as its Director-General.

Also, the Director-General of the M.K.O. Abiola Campaign Organisation and former Senate Deputy Leader, Jonathan Zwingina, has been named the national coordinator of the Yahaya Bello Presidential Campaign

Bello while reeling out some of the plans he has for the country said the 2023 presidential elections is about the survival of Nigeria, adding that he would build on the legacy of the President, Major General Muhammadu Buhari (retd.).

According to him, having been the governor of Kogi state since January 27, 2016, Nigerians should assess his suitability to be president based on his scorecard of performance.

Bello said, “I will be running on the broad political philosophy of progressive activism through social action and political reforms. We are so blessed as a nation but yet he does not always seem so. I am running to restore hope by providing security, unity, and progress to all Nigerians.

“Our focus will be proper management of our great diversity so that it can really be an advantage.”

He added, “I am running for president because I see a bright light shining at the end of the tunnel for our nation. I am not one of those who only see doom and glue. It is my intention to take custody of that light to pierce the dark spot in our past and present by eliminating every gap in our nationhood and fixing them.

“I will ensure that the light is handed over in due course to successors who will be trustworthy of our great future which the Federal Government led by me will build.”

On insecurity, he assured that if elected, he would never tolerate nonstate actors who take up arms against the nation.

“But I will be willing to listen to all sides and address all agitations fairly especially those borne out of genuine imbalances in the treatment of citizens by the system. I will put a stop to the existential mistreatment of any people among us.

“According to a BBC report of February 13, 2012 over 100 million Nigerians live in extreme poverty during the People’s Democratic Party (PDP) era. In 2018, with APC in the saddle that figure has dropped to about 87m people yet Nigeria overtook India as the poverty capital of the world. Just this month, Nigeria through the effort of the president relinquish the title back to India and brought down the figure to about 70m people.

“It is therefore clear that our path to national prosperity lies in pulling millions of Nigeria out of poverty.

“The Buhari has a target of lifting 100 million Nigerians out of poverty by the year 2030, a Yahaya Bello administration or presidency will have an additional target of creating N20 million by the same year 2030 with the aim that each of them will empower five other citizens”, the governor said.