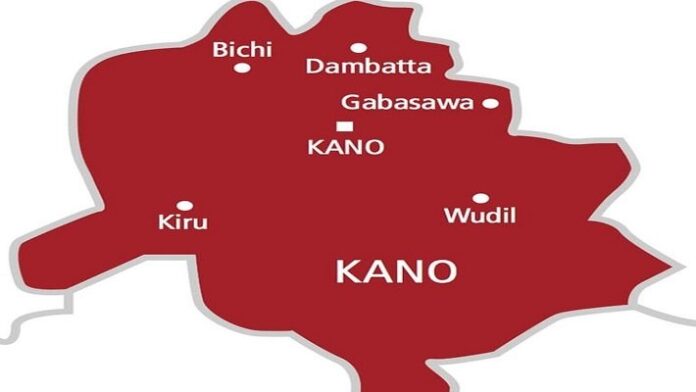 Some mob, on Saturday, set ablaze a suspected kidnapper, arrested in Tudun Wada Local Government Area of the metropolis

The suspect, who was roasted by the angry residents was alleged to belong to a three-man gang, that carried out a foiled kidnap operation in the area.

The spokesman, Nigeria Police, Kano Command, Abdullahi Haruna Kiyawa, who confirmed the incident, said: “on 02/04/2022 at about 0130hrs, a report was received that some unknown gunmen stormed the resident of one Elisha Aminu, ‘m’, of Katsinawa Village, Tudun Wada LGA, Kano State and kidnapped his two daughters, (1) Zainab Elisha, ‘f’, 18 years old, (2) Nafisa Elisha, ‘f’, 16 years old and fled toward the fringes of Falgore Forest.

He said “The team simultaneously swung into action with the help of a Local Vigilance Group, “Yan Bula”. The forest was combed and the gunmen were trapped, as a result, a gun duel ensued for about 2 hours.

“Three of the Kidnappers were gunned down and the two victims were rescued unhurt without any casualty on the part of the rescue team. One Locally Made AK-47 Rifle with 6 Live Ammunition Recovered. An angry mob also set one of the Kidnappers ablaze.

Kiyawa further said, “The bodies were rushed to Tudun Wada General Hospital where a Medical Doctor certified them dead. Victims are reunited with their families. Additional Puff Adder teams have been deployed to the forest for further possible arrest.

“Commissioner of Police commended the officers that participated in the operation and appreciates the efforts of members of the Local Vigilante (‘Yan Bula) for their support and assistance.

“CP Sama’ila Shu’aibu Dikko, fsi warns that criminals will have no hiding place in Kano State. They are advised to either repent or leave the State completely, as no stone will be left unturned.”