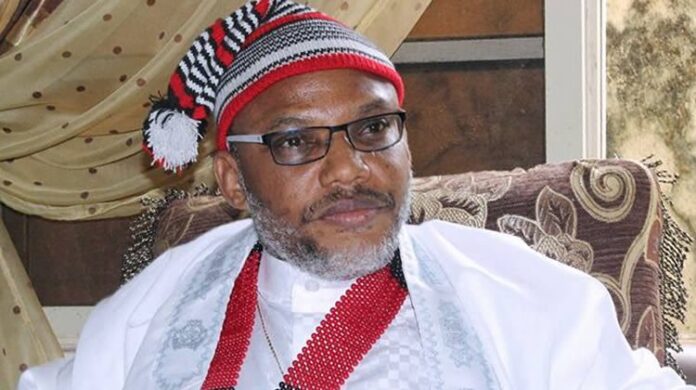 Ahead of the ruling of Justice Binta Nyako of a Federal High Court in Abuja challenging the competence of the treason charges filed against him by the Federal Government, leader of the Indigenous People of Biafra, Nnamdi Kanu, has called on his supporters to remain strong in prayers as the day approaches.

He also expressed the conviction that he would get justice that day.

Kanu’s lawyer and human rights activist, Ifeanyi Ejiofor, said these in a statement issued on Monday after their meeting in the custody of the Department of State Services.

He said, “Our court-ordered routine visit to our indefatigable client, Nnamdi Kanu, was undertaken today (Monday).

“The cardinal subject forming the fulcrum of our discussion centred on our final strategy towards handling the outcome of the anticipated ruling, come Friday, on our application challenging the competence of the charge.

“Our expectations within the precincts of enabling laws were noted and taken cognizance of. Onyendu is eminently ready for Friday’s ruling. He is firm in his disposition and strong in his conviction.

“Chukwuokike Abiama will take absolute control come April 8, 2022 and we expect justice to be manifestly seen to have been done at the end of the proceedings.

“Be assured that there will be light at the end of the tunnel. Onyendu’s freedom will happen soon. It is forward ever and backward never!

“Onyendu requested millions of his followers, supporters and Ezigbo Umuchineke to remain strong in prayers, particularly as this special day approaches. You all should remain resolute in the belief that Onyendu will emerge victorious in no distant time.

Meanwhile, the Federal High Court sitting in Abuja, on Monday, ordered the DSS to pay N5 million to Maxwell Opara, one of the lawyers defending the detained IPOB leader.

The court, in a judgment by Justice Zainab Abubakar, also directed the security agency to tender a written apology to Opara and publish the same in a national daily.

The judgment followed a fundamental right enforcement suit the lawyer filed to protest the alleged degrading treatment he was subjected to when he visited Kanu at the DSS detention facility in Abuja.

Opara told the court that the DSS had on August 30, 2021, when he paid a routine visit to Kanu, commandeered him to a particular room within its facility for purposes of alleged bodily search, “wherein they forced him to remove his medicated eye-glasses, wedding ring, belt, jacket and shoes and accordingly left him shabbily dressed.”

He told the court that he was subjected to the humiliation of holding his trousers with his hands, wearing bathroom slippers meant for awaiting trial inmates and exposed to air conditioner-inflicted cold for three hours.

Meanwhile, the DSS, in a counter-affidavit that was deposed by one of its personnel, Ahmed Magaji, told the court that depositions in Opara’s affidavit were untrue.

It told the court that it simply conducted routine security checks on the day Opara visited Kanu.

In her judgment on Monday, Justice Abubakar granted all the reliefs the applicant sought in the suit, though she reduced the damages from N50m to N5m.