Umahi planned to kill me in detention, PDP spokesman alleges 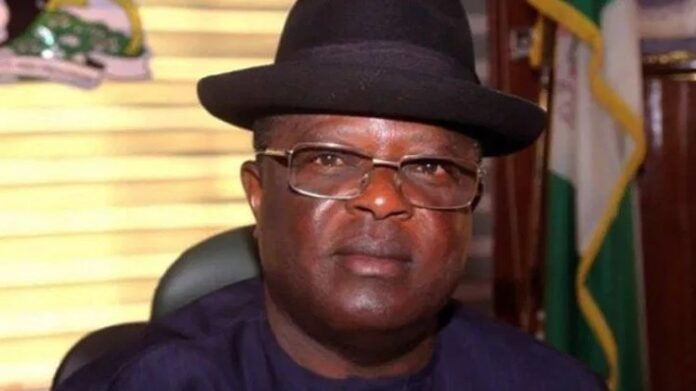 The Publicity Secretary of the Peoples Democratic Party in Ebonyi State, Comrade Chika Nwoba, has alleged that the state Governor, David Umahi planned to kill him while he (Nwoba) was in detention.

Nwoba was arrested by the Ebonyi State Government over alleged offences bothering on fake news on social media, among other things, and detained for over four weeks. He was released early March.

The PDP spokesman claimed that but for the stiff and swift intervention of the Force Headquarters, Abuja, the intention of the powers that be in the state was to render his life ‘null and void.’

He also claimed that during his travails, the police in the state, who were supposed to be his ‘friend’, were merely taking orders from the governor and acting like his aide.

He stated this in Abakaliki, during a meeting with journalists, on Monday, describing as outrageous the number of innocent Ebonyi indigenes wallowing in various police detentions in the state.

He said, “Inasmuch as I thank the police for rescuing me from the boot of the vehicle of my abductors in Abakaliki on the 9th of January, 2022, my stay in their care was one with mixed tales. I had expected that since they came on a rescue mission, what should have happened was to discharge me or hand me over to the PDP to whose service I was attending at the point of my kidnap by the agents of the Ebonyi State Government, as it were. I was shocked seeing them hand me into the torturous hands of Engr David Umahi, who has always sought my murder for being a voice against his military rule in Ebonyi State.

“While I was receiving first aid medical treatment at the police medical unit, petitions began to fly in with unfounded allegations of murder and conspiracy to commit same. While I was still reeling in the pains of the injuries and bruises I sustained during the attack, the police, through the order of Gov. David Umahi, drove me to court without conducting investigations into the allegations brought against me. Along the line of the villainous move, call came from the Force Headquarters, Abuja, demanding that the murder allegations be withdrawn by the police since there’s no evidence of indictment. I was then prosecuted for cultism, cybercrime and conspiracy.

“Everybody knows I am not a cultist and never have I engaged in cybercrime. It’s painful that the idea of cybercrime with Ebonyi State Government, as it were, was hinged on merely writing on the Facebook instead of what the law calls it. In the fashion of premeditated arrangement, I was thrown into the Afikpo Correctional Centre where I spent three weeks after spending another 3 weeks in the police cell. The hospital check-up exercise doctors recommended to me was denied me by the police. I continued in pains for those numbers of weeks I spent in detention.

“From my experience, the Nigeria Police cell is a hell on earth. The way the CP himself was taking orders from the governor to handle interested cases remains something no one should be victim of again in Ebonyi State. I was detained longer than it should be. What protected me from further torture was the concern my matter raised in Nigeria. Without that, I would have been pummelled in detention as other inmates were done.

“The entire idea about my abduction and subsequent detention was to keep me out of circulation for a period of one year. To God be the glory, the police were able to respond to the distress calls made to them for my rescue. Without that, the intention of my abductors was to take me to the governor who, according to information, had prepared an injection with which to drug me and render my life null and void. The former governor, Umahi, planned to kill me, while I was in detention.

“Even judges in court were physically tensed by the calls to not grant bail to people in the torturous calendar of the governor. What happened was that the governor called and prescribed or awarded offences against innocent citizens nabbed for criticising his administration on the social media. That had always been the case. Some kidnapped by the Ebubeagu officers died along the line of torture in their den. It’s as horrendous as that.

“In summary, I wish that the Inspector-General of Police looks into how Ebonyi is policed. The current Commissioner of Police in Ebonyi acts as an aide to the former Governor Umahi instead of carrying out his duties professionally. Ebonyi has never had the present kind of CP; a CP who takes citizens to the governor to award charges against them.

“I had no problem with the Afikpo correctional centre. They operate professionally apart from poor nutritional feeding. That’s the only area they are not doing fine. The number of Ebonyians in detention for political reasons is outrageous. Something has to be done about it. It has never been like this since 1999. The judiciary should defy threats and administer justice as and when needed in Ebonyi State so as to depopulate the detention facilities in the state and let innocent people regain their freedom.”

The Special Security Consultant to the State Government, Chief Stanley Okoro-Emegha, when contacted, said he was busy and would get back to PUNCH Metro later on the matter.

He had yet to do so as of the time of filing this report, on Monday.

Also, the Commissioner of Police in the state, CP Aliyu Garba, said he would really reply to the PDP spokesman the moment he read his allegations.

He also threatened to arrest him if gave false information about him.

He said, “Where did he go to say so? And at what time did he say it, so that I can reply him very well?

“And if I have it and then if I have my own fact, I can arrest him for giving false accusation or information. So, even if I will reply, it’s when I see what he alleged.”