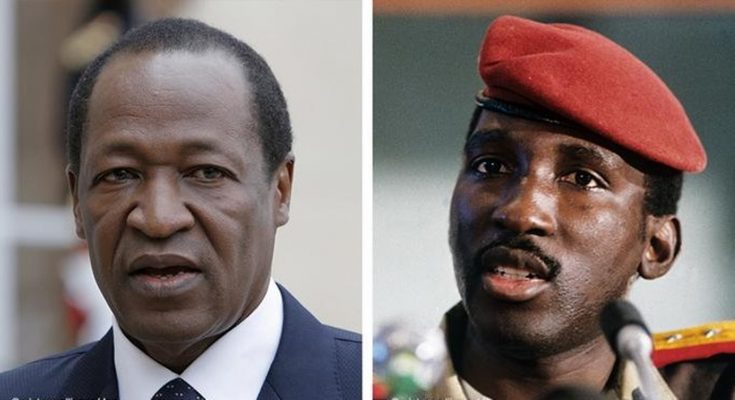 A military court in Burkina Faso on Wednesday handed down a life prison term to former President Blaise Compaore over the 1987 assassination of foremost revolutionary leader Thomas Sankara.

Applause erupted in the courtroom as the long-awaited verdict was read out, bringing the curtain down on a case that has afflicted the impoverished and volatile state for 34 years.

Compaore, who lived in exile in Ivory Coast after being toppled by public protests in 2014, and Kafando, who had been on the run since 2016, were tried in absentia.

The court also issued life terms to Hyacinthe Kafando, an officer suspected of having led the hit squad, and General Gilbert Diendere, an army commander at the time of the assassination, which coincided with a coup that brought Compaore to power.

The six-month trial was avidly followed by many in the landlocked Sahel nation, for whom Sankara’s bloody death remains a dark blot on the country’s history.

A fiery Marxist-Leninist who blasted the West for neo-colonialism and hypocrisy, Sankara was shot dead on October 15 1987, little more than four years after coming to power as an army captain aged just 33.

He and 12 colleagues were killed by a hit squad at a meeting of the ruling National Revolutionary Council.

Discussing the leftwing icon’s death was taboo throughout the 27-year reign of Compaore, Sankara’s comrade-in-arms.

The court in the capital Ouagadougou found Compaore, Kafando and Diendere all guilty of harming state security.

Compaore and Diendere were also found guilty of complicity in murder, and Kafando of murder.

Their sentences exceeded the request of military prosecutors.

They had sought 30 years for Compaore and Kafando, and 20 years for Diendere, who is already serving a 20-year term over an attempted military coup in 2015.

Eight other accused were given jail terms ranging from three to 20 years, while three defendants were acquitted.

In its closing statement, the prosecution recounted in grim detail, a plot to ambush Sankara and his closest followers.

Sankara headed to the National Revolutionary Council meeting for a rendezvous with death, for “his executioners were already there,” it said.

After Sankara entered the meeting room, the hit squad burst in, killing his guards, the prosecution said.

“The squad then ordered president Sankara and his colleagues to leave the room. They would then be killed one by one.”

Ballistics experts told the trial Sankara had been shot in the chest at least seven times by assassins using tracer rounds.

But the defendants said the victims died in a botched attempt to arrest Sankara after he and Compaore fell out over the direction the country’s revolution was taking.

Compaore boycotted what his lawyers dismissed as a “political trial”, while an attorney for Diendere said his client’s life term was “excessive” given that he had attended the trial and contributed to proceedings, while the two other chiefs accused were absent.

Sankara’s widow, Mariam Sankara, who attended the trial throughout, hailed the outcome.

“The judge has handed down his verdict in line with the law, and everyone appreciates this,” she affirmed, adding ”it is something that we had requested – justice and truth.”

“Our goal was for the political violence we have in Burkina Faso to come to end. This verdict will give many people a cause for thought.”

Guy Herve Kam, the Sankara family’s lawyer, said the culmination of a decades-long legal fight made him “proud” to be both a Burkinabe and a lawyer.

Also, Prosper Farama, another Sankara lawyer, said, “Our hope is that this odious crime never happens again in either Burkina Faso or elsewhere in Africa.”

As one of the world’s poorest countries, Burkina has had a long history of political turmoil since it gained independence from France in 1960.

Reminders of that instability came during the trial, when proceedings were briefly suspended after a coup on January 24 that deposed the elected president, Roch Marc Christian Kabore.

Kabore was toppled by rebel officers angered over his failure to roll back a nearly seven-year-old jihadist insurgency.

The campaign has claimed some 2,000 lives and displaced some 1.8 million people.