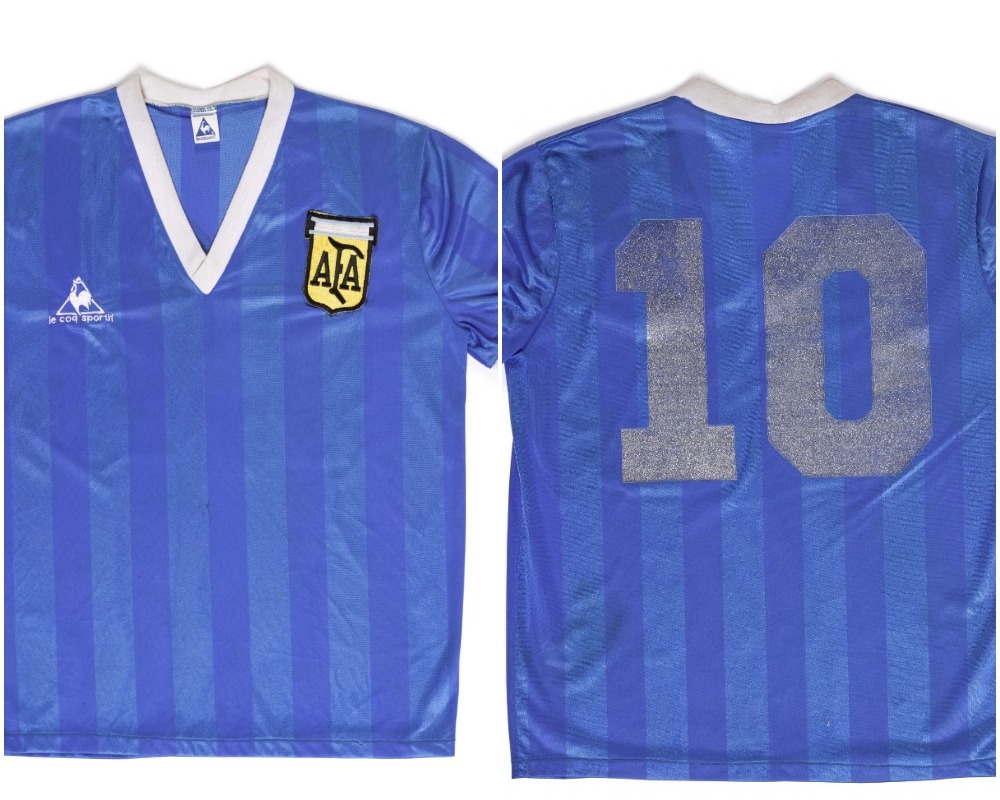 The jersey worn by Diego Maradona when he scored twice against England in the 1986 World Cup, including the infamous “hand of God” goal, is to be auctioned off later this month, Sotheby’s announced Wednesday.

The blue number 10 shirt has been owned since the end of the controversial World Cup encounter by opposing midfielder Steve Hodge, who swapped his jersey with Maradona after England lost 2-1.

The quarter-final showdown, one of the most memorable in World Cup history, held particular significance for Argentina as it was played only four years after they lost the Falklands war.

The match became etched in football folklore for Maradona’s two goals — one notorious and one sublime – in Mexico City’s seething Aztec Stadium.

The first came shortly after half-time when Hodge, on the edge of the England penalty area, intercepted a pass and flicked the ball back towards goal.

Maradona, running into the box, rose with England’s goalkeeper Peter Shilton and punched the ball into the net.

England were incensed and complained to officials who, believing Maradona had headed the ball, allowed the goal to stand.

Four minutes later, Maradona struck again and this time there was no doubt.

Receiving the ball and turning inside his own half, Maradona left five English defenders in his wake before gliding past Shilton and slotting home for a strike that was voted “Goal of the Century” in a 2002 FIFA poll.

– National hero –
Argentina won the final to lift the World Cup for the second time in eight years and Maradona, already a superstar, became worshipped in his home country.

After his death from a heart attack in 2020, Argentina held three days of national mourning.

Hodge, whose autobiography is titled “The man with Maradona’s shirt,” has for the past 20 years loaned the jersey to be on public display at the National Football Museum in Manchester.

Sotheby’s said in a statement to AFP that it will hold its own public display for the jersey in London, during the online auction scheduled for April 20 to May 4.

The decision of whether to keep it accessible to the public will be up to the winning bidder.

Brahm Wachter, Sotheby’s head of streetwear and modern collectibles, said “the list is long for the type of people or organisations that might want to own the item.”

Bidding for the Maradona memorabilia will start at £4 million ($5.2 million), below the $5.6 million record for game-worn shirts, set in 2019 for a jersey Babe Ruth wore while on the New York Yankees.