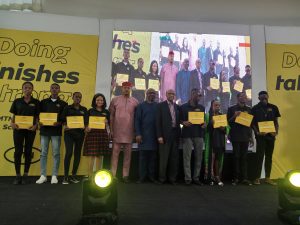 MTN Foundation, a subsidiary of the mobile telecommunications giant, MTN Group Limited, has offered scholarships to 360 undergraduates in the 11 states of the South-South and South-East geopolitical zones of Nigeria.

The Director of the Foundation, Mr Dennis Okoro, announced the scholarships at an award ceremony organised by the foundation for incoming scholars for the year 2022 in Owerri on Wednesday.

Okoro, who stated that each of the beneficiaries would receive a total of N200,000, disclosed that the foundation had invested N3 billion in 4,212 beneficiaries of its scholarships between 2011 and 2022.

He said that the scholarships were aimed at encouraging academic excellence and providing opportunities for constant self-improvement, as well as access to entrepreneurial funding initiatives.

While saying that the awardees, drawn from tertiary institutions across the country, were picked on merit, Okoro called on well-meaning Nigerians to partner with the foundation, for youth empowerment and development.

“The awardees have all merited it, having successfully competed with about 50,000 other applicants. So we are here to bring them in and to induct those who have graduated, passing through the scheme,” he said.

Mr Innocent Entonu, the Foundation’s General Manager for Sales and Promotions, South-East and South-South, said that the scholarships would provide financial support to the awardees.

He said that it would motivate them to continue aspiring to acquire the best education for a secure future, both for themselves and the country at large.

Also, Imo State Governor, Hope Uzodimma, thanked the foundation for organising the event in the state and for giving back to society.

Uzodimma, who was represented by his Special Adviser on Youths, Mr Eric Uwakwe, expressed readiness to partner with the foundation for the welfare of youths in the state and the country at large.

One of the awardees, a blind 300 level Law student of the University of Nigeria, Enugu Campus, Mr Obinna Onyeishi, was full of gratitude to the foundation and pledged to not be inhibited by visual impairment.

NAN reports that the high point of the event was the presentation of cheques to the awardees by officials of the foundation.