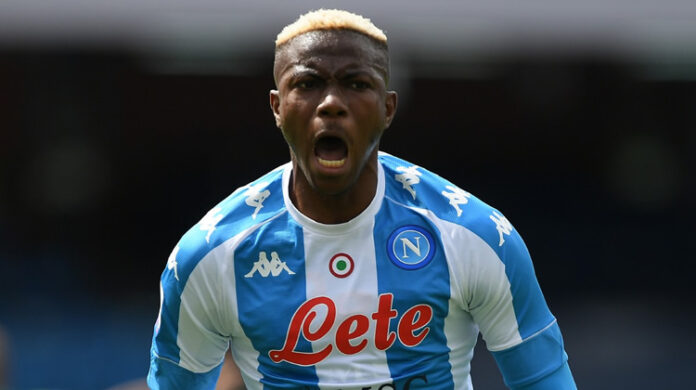 Napoli have raised the price tag of Nigeria international Victor Osimhen to €120m after a host of interest from several European clubs including Arsenal, Barcelona, Real Madrid, Tottenham, Newcastle and others.

Osimhen has been Napoli’s best player this season, scoring 15 goals in 25 appearances in all competitions and providing four assists, despite spells on the sidelines due to injuries and COVID-19.

The energetic striker’s performance in Serie A has earned him two Player of The Month awards for September 2021 and February 2022.

According to Italian website Il Corriere dello Sport, Newcastle in January offered €100m for the Nigerian striker, which was rejected.

Previous reports in Italy claimed €100m would have been enough at the end of the season to sign the 23-year-old, but the Rome-based paper now reports that Napoli have raised the price tag for their star striker.

Arsenal and Manchester United are strongly interested in Osimhen, but Napoli won’t sell for less than €120m, according to the report.

Should Osimhen leave in the summer, the Partenopei would pounce on Sassuolo‘s Gianluca Scamacca, who has also been linked with Inter and Milan.

However, one of Osimhen’s agents Roberto Calenda has revealed that the Nigerian is focused on winning with Napoli and not bothered by the transfer rumours.

“Osimhen is focused on the pitch, he wants to win and he is showing the right commitment. He plays for a strong team and journalists need to fill the papers’ pages,” he said.

“Even somebody who knows nothing about football would name Osimhen among the top strikers. He is a Napoli player and he will face seven finals now. The focus is all on the current campaign.”