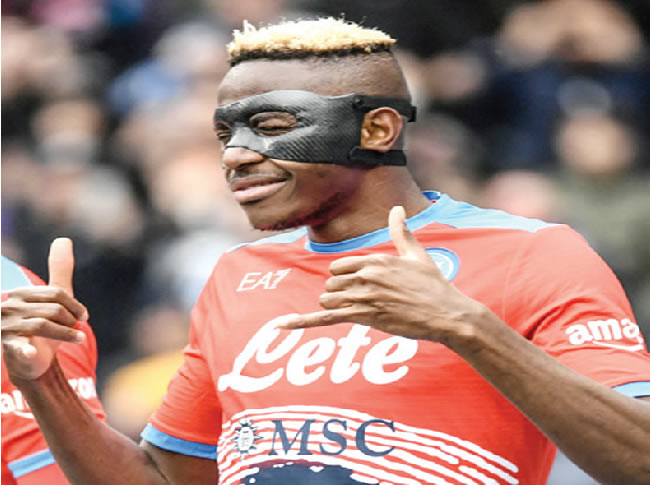 Napoli have announced that Nigerian striker Victor Osimhen is a major doubt for this weekend’s Serie A game after leaving training prematurely due to an injury to his left thigh, PUNCH Sports Extra reports.

Luciano Spalleti’s side will resume their title chase against Fiorentina on match-day 32 on Sunday.

Osimhen recently returned to Italy after Nigeria failed to qualify for the 2022 World Cup in Qatar.

According to tuttonapoli, the striker felt a pain in his left thigh during training on Wednesday and had to excuse himself from the remainder of the training.

“Victor Osimhen left the training session prematurely today (Wednesday) due to a resentment in his left thigh,” the website wrote.

“This was reported by SSCNapoli in the usual report from Castel Volturno regarding the resumption of preparation today after yesterday’s rest day. At this point, the extent of the muscle problem and the possibility of recovery for the match against Fiorentina on Sunday afternoon must be understood.

“For the rest, today Ounas, Petagna and Di Lorenzo have carried out personalized training on the pitch while Meret has carried out the entire session in the group and are therefore to be considered available for the match with Fiorentina.”

Despite a season plagued by injuries, Osimhen has scored 15 goals in 25 games across all competitions and is one of the reasons why Napoli are still in contention for their first league title in over three decades.

Meanwhile, Osimhen has been tipped to reject Newcastle and Arsenal if Manchester United come calling instead, according to one observer of the Napoli striker’s situation.

According to Corriere dello Sport journalist Antonio Giordano, though, Osimhen would reject Arsenal and Newcastle approaches to move to Old Trafford – if the Red Devils also came forward.

“Osimhen is followed by half the world and it is true that Newcastle showed 100 million [euros] in January,” Giordano said. “But, in my opinion, if the English club returns, the Nigerian will not go,” he said.

“In the personal imagination of a 23-year-old player, United are a temptation and if the Red Devils reach certain figures, history teaches us those certain operations must be done.”

The Nigeria international has impressed following his initial rise at Lille and now in Serie A. He has scored 25 goals in 55 games for Napoli, which equates to close to a goal every two games.