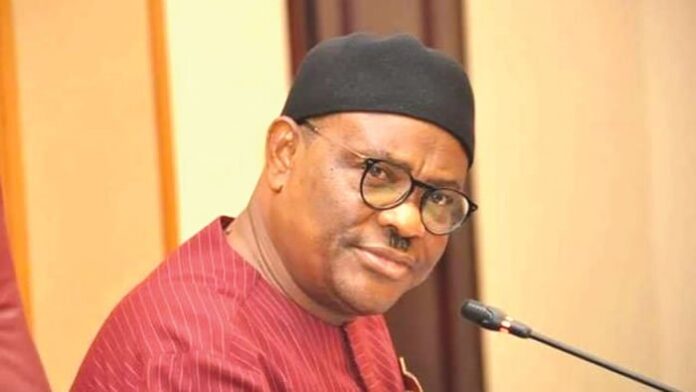 The Rivers State Governor, Nyesom Wike, on Tuesday, wooed members of the Gombe State chapter of the Peoples Democratic Party on his presidential aspiration to lead Nigeria in 2023.

The one-time Minister of State for Education said his mission was to improve the economic reality of the country, harping on the need to provide security for the protection of lives and property.

Wike called on the stakeholders in the state to join hands with him in delivering democratic dividends which he said the PDP was known for.

Receiving the Rivers State Governor at the PDP secretariat, former Governor Ibrahim Dankwambo said the choice of Wike would yield the country the much desired progress.

Dankwambo revealed that as Minister of State of Education under the Goodluck Jonathan-led administration, he attracted school projects across various Gombe senatorial districts.

He disclosed that whosever the PDP decides to front as candidate the state would back the person, adding that the state is predominantly a PDP state.

Dankwambo said, “We assure you; our people are behind you; those who have seen you talking on television have seen the energy in you, they are seeing the action in you and the Commander-in-chief in you but for now in Rivers they call him Mr project.”

He narrated a scenario when Wike visited him in Abuja, stressing that the aspirant has become popular for performance, promising to support him if he emerged as the candidate of the party.

Dankwambo added, “When he came to my house my steward said Mr project is waiting for me and I asked who is Mr project; even the steward knows you are Mr project. If as a Minister of State you can do things for the state, we thank you. We will sit down and digest everything you have told us at the appropriate time we will take decision.

“Power belongs to God, He gives and takes power from whom He wants. At the appropriate time whoever that emerges the candidate will sit down with Gombe people and negotiate. We will not be taken for granted, we will vote for you, we will vote for whoever emerges as candidate of our party under our mutually agreed plans.”

Commenting on the performance of the party in 2019 elections, Dankwambo said PDP has realised its mistake and would reinvent into a better showing.

“We have realised our mistakes in 2019; and we are putting our house in order; inshallah come 2023, Gombe is PDP,” Dankwambo said.