Can Snakes Recognize Themselves? Read What A Controversial Study Says 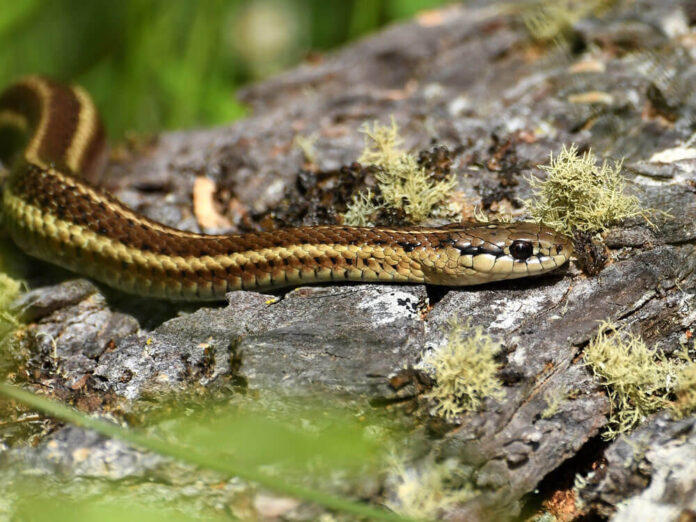 An experiment that uses snakes’ chemical senses “could change people’s opinions of reptiles away from that of slow, dumb, dull, instinct machines,” scientist says.

Scientists who study snake behaviour are often faced with a challenging conundrum: How do you get into the mind of an reptile?

Primates can gesture with their hands, elephants can signal with their trunks, and ravens can peck with their beaks to indicate a particular response to an experiment. But serpents?

That’s why researchers have designed a test just for snakes by playing to their strengths: their chemical senses.

Snakes rely on chemical cues to recognize prey, escape from predators, find mates, and navigate their habitats. In addition to their sense of smell, snakes also flick their tongues to carry chemical cues; say sex pheromones from a potential mate, to a specialized organ in the roof of the mouth, an action roughly equivalent to sniffing.

A recent study on common garter snakes, a species widespread in the Northern America, found that the reptiles can discriminate their own chemical signature from that of littermates fed the same diet. Study leader Gordon Burghardt, an ethologist and comparative psychologist at the University of Tennessee, Knoxville, says it’s a demonstration of self-recognition, a snake version of recognizing your mirror reflection.

Recognizing one’s reflection is considered an advanced ability, and it’s only been confirmed in a handful of species, such as chimpanzees, orangutans, and dolphins.

“Snakes demonstrate many of the same cognitive and perceptual mechanisms as other animals if you study them in the right way, ask the right questions, and respect their biology and way of dealing with the world”

In the study, published recently in the journal Behaviour, Burghardt and colleagues studied 24garter snakes born in a single litter in their Tennessee lab.

The snakes had been housed individually since birth and fed either an all-fish or all-worm diet, making it possible to differentiate the snakes’ feces chemically.

During each experiment, the scientists measured the rate of each snake’s tongue-flicking and its overall movement around the cage.

This behaviour shows that the garter snakes can recognize their own chemical cues as distinct from those of other snakes, even closely related snakes eating the same diet.

About 50 years ago, American psychologist, Gordon Gallup and colleagues developed a mirror self-recognition test that is still the standard for many experimental studies.

Researchers put a mark somewhere on an animal’s body that it can only see in its mirror reflection. If the animal looks in the mirror and then touches or examines the mark on its body, it passes the test. People tend to pass the test as toddlers, and some great apes—chimpanzees, orangutans, and bonobos: recognize themselves. A selected few non-primates, such as elephants and dolphins, may qualify as well.

But Gallup and his colleagues are skeptical of the evidence for mirror self-recognition in any species other than humans and great apes. They have also critiqued non-visual self-recognition studies, such as those using odours or other chemicals, that purport to be equivalent to mirror tests.

That’s why one of Gallup’s frequent collaborators, psychologist James Anderson of Kyoto University, says that even though the snakes in Burghardt’s study may demonstrate chemical self-recognition, it’s not the same as an ape or human recognizing their appearance in a mirror.

Scientists are also divided about what an animal recognizing itself in the mirror really means in terms of cognition. Gallup and Anderson contend that passing the test is equated with self-awareness, self-consciousness, and possibly even the awareness of others’ unique selves.

Some researchers think self-awareness is more likely to exist on a continuum, with different species demonstrating varying levels. It’s possible self-recognition may be one of the more basic abilities on this continuum, one that is common among many animals, Burghardt says.

“No matter how careful these authors of the snake study were, the biggest hurdle will be convincing some scientists that the findings mean anything beyond a rudimentary response to stimuli,” says Gordon Schuett, an ecologist at Georgia State University, in Atlanta.

But it’s good to push these boundaries, he adds: The new study is useful in that; it may challenge some preconceived notions about snakes’ cognitive capacities.

A swelling stream of research supports the idea that snakes can learn, adapt on the spot, and even make friends.

For instance, scientists have documented northern Pacific rattlesnakes moving branches out of the way before hunting, seemingly altering their habitat to help them ambush prey. Common garter snakes are shown to have personalities and prefer to socialize with specific individuals. And recent studies of rattlesnakes have revealed that male diamondbacks find and stay in the same den year after year, while juvenile and pregnant female timber rattlesnakes prefer to “cuddle up” with close relatives.

Burghardt says that snakes have a lot of the same basic tools to navigate the world as mammals, but their anatomy and lifestyle may keep these capacities hidden.

“My career,” he says, “has been devoted to trying to change people’s opinions of reptiles away from that of slow, dumb, dull, instinct machines.”