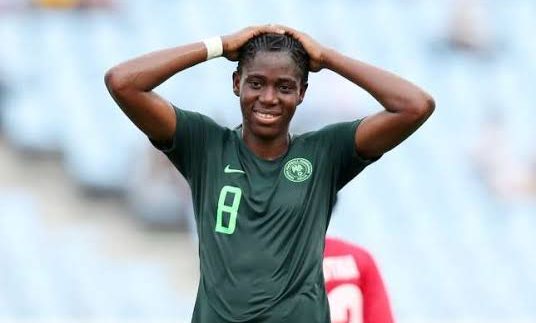 There are plans by the Nigeria Football Federation to strip Asisat Oshoala of Super Falcons captaincy, according to reports.

The Barcelona Femeni star took over as captain after Desire Oparanozie was removed amid controversial circumstances in September 2019.

Before her removal, Oparanozie had complained about the unfair treatment of the players and unpaid allowances during the 2019 FIFA Women’s World Cup.

However, Oshoala denied knowledge of the reported plan to strip her of captaincy while reacting to a post by a fan on Twitter on Thursday.

“Why is it that the NFF or coach always have issues with Super Falcons players. if it isn’t Desire, it is Onome or Asisat. Stripping them of their leadership roles or alienating them from the team isn’t always the solution, check yourselves NFF or whoever the shoe fits in there,” Latifat Ohio tweeted.

“When somebody openly said she fasted and prayed against the captain band, how we wan do na? Check everybody wey collect after her, how far?” she said while reacting to Asake @asakesadollar’s post.

Oshoala subsequently retweeted other posts on her reported removal as Super Falcons captain.

She also retweeted Alika @Alika_444’s tweet, “I think it’s also time for players to pick their desired captain.
It’s not a competition, you did the same with @NGSuperEagles.”

Mustafa Kehinde @sweetkentoma warned Oshoala against tweeting on the matter, saying that she may be droped from Africa Women Cup of Nations tournarment.

Kehinde said, “You should keep your mouth shut for a while Asisat. Mind your speech.”

Fejiro @brandyspark added, “I just want to see her play in AWCON. Oshoala abeg no retweet too much so you go play AWCON.”

Efforts to reach the Super Falcon’s spokesperson, Oluchi Tobechukwu, failed as of the time of filing this report.