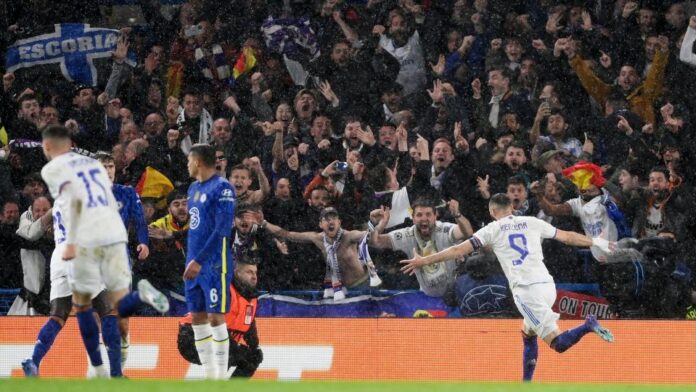 The France forward, who used to have to work tirelessly for his former Real Madrid team-mate, scored all of his side’s goals in a 3-1 win in London

Karim Benzema says he was always this good and that people blinded by Cristiano Ronaldo’s superhuman numbers just didn’t see it, and you know, maybe he’s right.

But what we can say with confidence is that no version of Benzema has been as brutally decisive as this one.

Paris Saint-Germain’s executioner, whose 17-minute hat-trick saw Madrid come from two goals behind to reach the Champions League quarter-finals, repeated the trick against Chelsea at Stamford Bridge on a wet Wednesday night.

As the rain fell, so did the goals, in minutes 21, 24 and 46, with Benzema’s two trebles fitting within the space of 76 Champions League minutes, helping Madrid to a significant 3-1 first leg victory.

It took Benzema to 11 goals in eight games in the competition and gives the record 13-time champions the belief they have the weapons they need to win the trophy again.

In goal, Thibaut Courtois made fine saves from Cesar Azpilicueta and Reece James, showing that at both ends of the pitch Madrid have pillars to rely on.

Benzema will rightfully get the headlines, though. No French forward has reached double figures in a European campaign since Just Fontaine in 1959.

Even if there are better teams in the tournament – Manchester City, Liverpool and Bayern Munich – Benzema can score against any of them.

He is a top-tier striker who can hold his own against Robert Lewandowski, Kylian Mbappe or Erling Haaland.

The forward has 37 goals in 36 games this season; at 34 years old, this is his best-ever campaign on a numerical front.

Indeed, no player had scored a hat-trick against Chelsea in Europe, until now.

The reality was that ‘King Karim’ and his Brazilian strike partner were too much for Thomas Tuchel’s flagging defence to contain.

The French striker, underrated for so long, is finally being viewed as one of the best on the planet and proved it with two stunning first-half headers.

The first he helped create, playing in Vinicius down the left, and when the Brazilian crossed it in, Benzema met the ball with a powerful header which flew into the top corner as if it were an actual driven shot.

Benzema’s second header, three minutes later, was equally impressive, with the forward managing to guide it with supreme accuracy back across Edouard Mendy and into the net.

After Kai Havertz pulled one back with an impressive header of his own, the third Madrid goal was a gift, foolishly given away by Mendy, whose carelessly underweighted pass outside his box left Benzema with an open goal.

Antonio Rudiger might have slid through him but, already on a booking, the German thought better of it and Benzema shrugged off the centre-half to roll home.

The last player to score successive hat-tricks in Champions League ties? Ronaldo, for Madrid in 2017 against Bayern Munich and Atletico Madrid.

It seems fitting, then, for Benzema to usurp him, just as he has taken Ronaldo’s goalscoring role in the team.

Benzema left to a standing ovation from the travelling support, after a clinical display which allows Madrid to host Chelsea with confidence at the Santiago Bernabeu on Tuesday.

And with Benzema in such predatory form, you wouldn’t bet against the two-goal margin growing as Chelsea chase the game.

After all, there is no more in-form forward in the Champions League right now.