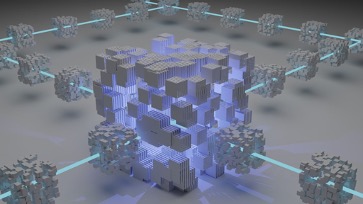 2021 was the year of cryptocurrency. Society familiarised itself with these complicated financial instruments and some have made a lot of money from them.

Scalability refers to a blockchain’s ability to remain fast, efficient, and cost-effective as its user base grows over time. Many major blockchains, such as Bitcoin (BTC) or Ethereum (ETH), have shown difficulty to handle the massive influx of new users and, as a result, have become slower and more expensive for users to use.

The world of cryptocurrency is constantly evolving and revolutionising itself, and scalability has now become one of the hottest challenges faced by projects in the space. In some ways, the crypto world very much follows the laws of natural selection: only the projects able to scale will have a chance to survive in the long term.

So, without further ado, let’s look at three projects working on blockchain scalability then!

Fantom (FTM) has become one of the most talked-about altcoins in recent months, notably due to the high transaction speed it allows and negligible gas fees required to use its network.

Fantom network’s transaction speed is made possible partly due to its use of the Proof-of-Stake (PoS) consensus mechanism, rather than the more traditional Proof-of-Work (PoW), notably used by the Bitcoin and Ethereum networks.

The PoS consensus mechanism offers a number of advantages compared to PoW, particularly being significantly faster and requiring much less energy than the PoW method, all of which while offering equivalent security for network users.

Let’s not forget that cryptocurrencies have been heavily criticised until now for their high energy consumption, with Bitcoin’s electrical consumption in 2021 surpassing that of actual countries such as Argentina. The environmental question is therefore a crucial one, and Fantom has been able to provide a solid answer to it.

As a result, the Fantom network can easily handle 10,000 transactions per second, and the development team set the objective for the network to process up to 300,000 TPS in the following years.

Fantom is therefore much faster than Ethereum and its 15 TPS. Besides, Fantom’s Ethereum-compatible ecosystem allows Ethereum-based developers to easily transfer and continue building their decentralised applications (dApps) on the Fantom ecosystem, making FTM an all-the-more interesting coin to add to your watchlist.

NEAR Protocol (NEAR) is a very interesting initiative that has received a little less spotlight than Fantom despite being as, if not more promising than the latter.

NEAR Protocol leverages a concept called sharding which refers to when a blockchain is being split into different fragments called shards in order to spread the amount of data across them. These shards are then able to process their own data autonomously, allowing the overall network to remain fast and efficient despite an increasing user base and transactions.

NEAR Protocol’s sharding technology, called Nightshade, disrupted the market and now enables the NEAR network to process a record 100,000 TPS, making it one of the fastest blockchains currently on the market, along with Solana (SOL).

And in fact, after seeing SOL’s meteoric rise in price, making it the 6th largest cryptocurrency with a market cap nearing $40 billion, it is easy to imagine NEAR Protocol following a similar trajectory with its industry-leading sharding technology and transaction speed.

Besides, the NEAR Protocol team announced last Wednesday to have raised an additional $350 million in a new round of funding, cementing its credibility to institutional and retail investors – keep an eye on this one!

Quitriam Finance (QTM) is another initiative that focuses on the challenge of blockchain scalability.

Instead of resorting to sharding, Quitriam Finance chose a different way to address this challenge. In fact, the Quitriam Finance team is developing a multichain decentralised exchange which will be deployed on several blockchains, allowing investors to always access the best transaction speed and gas fees.

According to Quitriam Finance’s whitepaper, this strategy could allow its ecosystem to handle up to 50,000 TPS – a major performance if that is confirmed!

On top of that, the Quitriam Finance ecosystem will include other interesting initiatives, notably staking and yield farming solutions, a lending protocol, an NFT marketplace, and even its own stablecoin under the ticker MC.

The launching of Quitriam Finance’s token, QTM, will be powered by BoostX, a recent and dynamic cryptocurrency launchpad that aims at helping emerging projects experience a successful go-to-market. Despite being recently created, BoostX already has an interesting track record, participating in the launch and presale of about a dozen Initial Coin Offerings (ICOs) projects.

This is certainly promising for Quitriam Finance’s own trading debut, which should happen in the weeks to come, save the date!