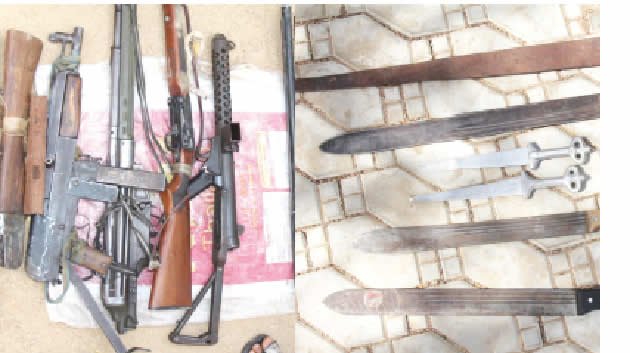 Operatives of the Bauchi State Police Command have arrested a 40-year-old man, Ahmadu Shuaibu, with an AK-47 rifle, 20 rounds of live ammunition, 31 cows, 28 sheep and one dog.

Shuaibu, a resident of Bakin Ruwaji, in the Toro Local Government Area of Bauchi state, was arrested by policemen on a routine patrol.

The state Police Public Relations Officer, Ahmed Wakil, stated this in a statement on Wednesday.

Wakil, a Superintendent of Police, said, “On March 15, 2022, around 8am, the command’s detectives, while on a routine patrol around Nabordo area of Toro LGA, in a swift response, intercepted one Ahmadu Shuaibu, alias Ruwaji, 40, of Bakin Ruwaji, Toro LGA.

“Thorough investigation was made and found in his possession were one AK-47 rifle, 20 rounds of 7.62mm calibre live ammunition, 31 cows, 28 sheep and one dog.

“During interrogation, the suspect confessed to have bought the prohibited firearm from one Ibrahim in Taraba State.

“Meanwhile, the suspect will be charged to court at the conclusion of investigation.”

Similarly, the police spokesman said the Rapid Response Squad, in a counteroffensive, arrested 21 members of the Sara Suka, a gang that had reportedly visited mayhem on residents of the state.

He said the suspects were arrested around 9.15pm on April 4, 2022, at Unguwar Hardo/Unguwar Mahaukata, within the metropolis.