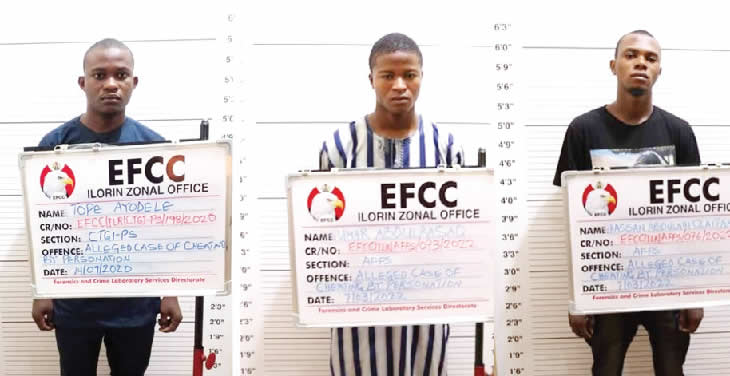 Also, Justice Mahmud Abdulgafar sitting at a Kwara State High Court, Ilorin, sentenced another convict, Tope Ayodele, to a suspended three months’ imprisonment which he ordered should be observed at the Federal Correctional Centre, Ilorin.

The Ilorin Zonal Command of the Economic and Financial Crimes Commission dragged the three accused persons to court for offences bordering on cybercrime.

The defendants, who were arraigned on separate charges, pleaded guilty to their respective charges.

Following their guilty pleas, Sesan Ola and Andrew Akoja, who prosecuted the cases on behalf of the EFCC, reviewed the facts of the cases and tendered the extra-judicial statements of the defendants, phones recovered from them at the point of arrest and several fraudulent messages printed from their device, which were admitted in evidence

In their separate judgments on the cases, the judges pronounced the men guilty.

The judge ordered that the convict should forfeit one iPhone 7 plus, which was recovered from him at the point of arrest.

He also sentenced Hassan to six months’ imprisonment with a fine option of N100,000.

Justice Sani also ordered the convict to forfeit one iPhone 7 which he used to perpetrate the crime and the sum of $200, which he benefited from his unlawful activities to the Federal Government.

In the same vein, Justice Abdulgafar sentenced Tope to three months’ imprisonment, which should be suspended.

The judge ordered that one Itel phone which the convict used to perpetrate the crime be forfeited to the Federal Government.

The Edo State Police Command says it has