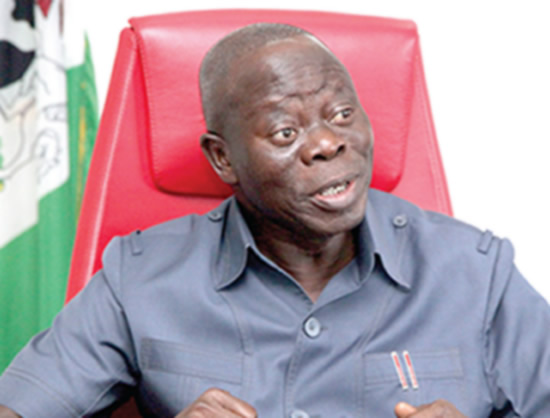 A group, Team Alimikhena, has said that the aspiration of former Governor of Edo State, Adams Oshiomhole, to represent the Edo North senatorial district in the Senate in 2023 will divide the All Progressive Congress in the zone.

In a press statement signed by the group’s Convener and Secretary, Sunny Ifijen, and Omeiza Ogumah respectively on Thursday, the group alleged that a repeat of what happened in the 2020 governorship election where party members worked at cross purpose may repeat itself in Edo North in 2023.

They said Senator Francis Alimikhena return to the senate would be compensation for his wonderful work as well as keep the party together in the district.

The group called on the former APC national chairman to take backstage and continue with his Kingmaker role rather than contest in the 2023 general elections.

“Oshiomhole should not allow himself to be dragged into Edo North Senatorial race and be disgraced at the end of the day. To yield to the desire of some self-interest seeking individuals may cost him the respect his supporters accord him.

“They have started again just like they convinced him against the wish of the masses to field the incumbent governor of the State, Godwin Obaseki in 2020.

“They have opened their fangs again to destroy the peace that has existed in the party in Edo North by trying to convince Oshiomhole to dethrone a performing Senator in the person of Francis Alimikhena.

“They are not just bent on convincing the former governor to run, but they trying in an unusual way to sow seed of discord in the harmonious relationship the two have shared over over years.

“To me, this unnecessary bickering and distrust that have rare its head because of these selfish persons can be put to rest if Oshiomhole decline to yield to their selfish demand.

“Indeed, Oshiomhole’s leadership role in the party, especially in Edo North, has been largely responsible for the party’s unity in the district and must not throw this away without stopping to reason what the effect of this demand would cost the party,” they stated.