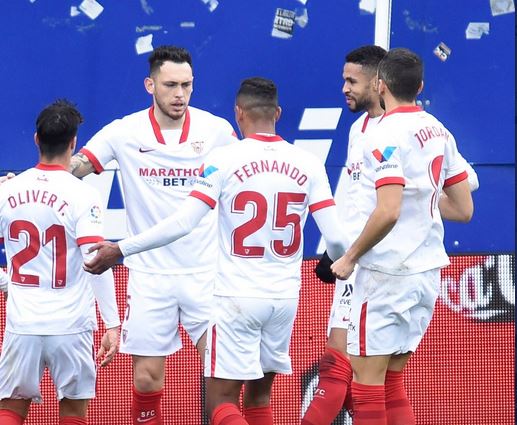 Rafa Mir and Papu Gomez struck late as Sevilla bounced back from last week’s defeat to Barcelona with a 4-2 win over Granada on Friday to go second in La Liga.

Julen Lopetegui’s side had looked ready to settle for a point after Granada captain Victor Diaz levelled 2-2 for the visitors with two minutes to go in the Ramon Sanchez-Pizjuan Stadium.

But in a late flurry Mir grabbed the his team’s third goal three minutes into injury time with Gomez adding a fourth six minutes later.

After losing last weekend to their direct rivals Barca, Sevilla now have 60 points, three ahead of both the Catalans who have played two games fewer, and Atletico Madrid.

On Friday, Granada started brightly with Darwin Machis scoring after 23 minutes as his side looked to move clear of the relegation zone.

But Diego Carlos pulled Sevilla back eight minutes later getting his head to a Jesus Navas cross.

Lucas Ocampos bundled in for the hosts after 66 minutes following a poor clearance from Granada keeper Luis Maximiano.

Mir had a goal ruled out after a VAR review before Diaz rekindled Granada hopes with a powerful header off a corner.

Sevilla made the most of nine minutes of time added on with Ivan Rakitic setting up Mir, unmarked at the far post, for the key third goal.