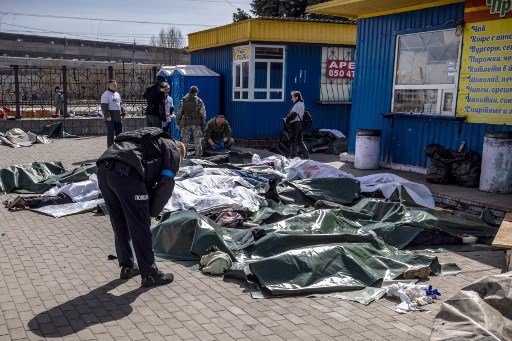 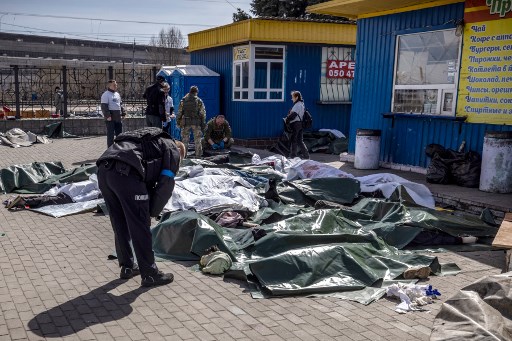 The six-week-old war between Russia and Ukraine continues to rear its ugly head in Europe’s most devastating moments, following burgeoning reports of ”war crimes” committed by invading Russian troops, who have apparently suffered serious unprecedented setbacks in their incursion into the Ukrainian territories.

At least 50 people, including five children, were killed in strikes on a train station in the East Ukrainian city of Kramatorsk, the local governor said Friday.

“Fifty dead, five of them children. This is the death toll at this hour after the strike by Russian occupational forces on the train station in Kramatorsk,” Pavlo Kyrylenko, the Governor of the Donetsk region, said on Telegram.

Ukrainian President Volodymyr Zelensky describes Russia as an “evil with no limits” after the attack, in which he says 300 were injured. The European Union says the attack is “horrifying”.

Russia’s defence ministry sheds more light on the scenarios that played out, accusing Kyiv of carrying out the attack, saying in a statement it wanted to use fleeing residents “as a ‘human shield’ to defend the positions of Ukraine’s Armed Forces”.

The attack comes as civilians in eastern Ukraine struggle to evacuate after officials tell them they have a “last chance” to avoid a major Russian offensive expected in the Donbas region.

Russia has redeployed its troops towards the east and south, aiming to create a land link between occupied Crimea and the Moscow-backed separatist statelets of Donetsk and Lugansk in Donbas.

European Commission President Ursula von der Leyen says that she is en route to the Ukrainian capital Kyiv, along with the bloc’s diplomatic chief Josep Borrell.

They are to meet with President Zelensky.

The destruction left by Russian troops in the town of Borodianka outside of Kyiv is “much more horrific” than the situation uncovered in the nearby town of Bucha, Zelensky says.

Ukraine’s prosecutor general says 26 bodies have been recovered from underneath two destroyed apartment buildings there.

The European Union approves an embargo on Russian coal – the first time the bloc has targeted the energy sector – and the closing of its ports to Russian vessels. It also says it has frozen nearly 29.5 billion euros in Russian and Belarusian assets so far.

The Group of Seven industrialised nations agrees to a ban on new investments in key sectors and fresh export restrictions, as well as the phasing out of Russian coal.

The UN General Assembly voted to suspend Russia from the UN Human Rights Council as punishment for the invasion of Ukraine.

It is only the second-ever suspension of a country from the council, after Libya in 2011.

The FAO’s food price index surged by 12.6 per cent between February and March, “making a giant leap to a new highest level since its inception in 1990”, the FAO says.

Zelensky urges the West to impose “Molotov cocktail” sanctions on Moscow, including a ban on Russian gas, and appeals for more weapons as he addresses Finnish MPs.

Ukrainian forces are in control of the North-East region of Sumy along the border with Russia, Governor Dmytro Zhyvytsky says on social media.

He warns that “the region is not safe”, pointing out ”many areas that have been mined and are still not cleared”.

The ministry said it summoned the Polish ambassador in Moscow to “strongly protest against the unjustified” expulsion of Russian diplomats from Poland on March 23.

“The ambassador was told that we regard this step as confirmation of Warsaw’s conscious desire to completely destroy bilateral relations,” the ministry claimed, adding that “the blame for that lies wholly with the Polish side”.

It also declared as “persona non grata” 45 employees of the Polish embassy in Russia and of Polish consulates in the cities of Irkutsk, Kaliningrad and Saint Petersburg “as a response to Poland’s unfriendly actions”.

Accordingly, the expelled diplomats must leave Russia by April 13.