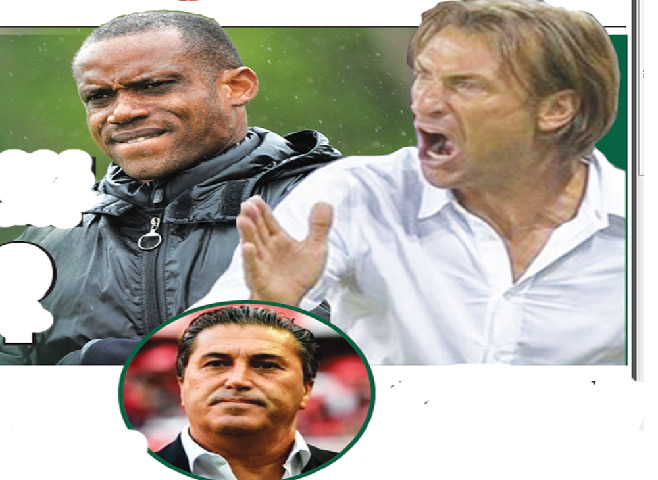 The search for the next Super Eagles coach on a permanent basis has kick-started with officials of the Nigeria Football Federation reportedly preferring a foreigner to lead the team, PUNCH Sports Extra reports.

Rohr was appointed as Eagles coach in 2016 and was in charge of the team for five years, four months and 10 days.

NFF’s Technical Director, Austin Eguavoen, was appointed last December as Gernot Rohr’s replacement on an interim basis, after the federation parted ways with the Franco-German following a string of uninspiring performances.

But Eguavoen failed when it mattered most as the Eagles could not qualify for the Qatar 2022 World Cup after they were held 1-1 in Abuja by archrivals Ghana, which saw the West Africans qualify on the away goal rule.

The previous fixture at the Baba Yara Stadium in Kumasi ended goalless.

Eguavoen recorded four wins, two draws and a defeat during his three months spell at the helm.

There have been reports in the media that the federation is already lining up a possible replacement for the former national team captain, who coached the Eagles to a bronze medal finish at the 2006 Africa Cup of Nations, with the 2023 AFCON qualifiers kicking off in just two months.

The report claims Herve Renard and Jose Peseiro are some of the foreign coaches penciled down for the position, while former Eagles captain and coach Sunday Oliseh is also being considered for the job six years after leaving the post.

The report added that the sports ministry wants the ex-Ajax and Juventus star back as head coach as he is available for free and more affordable than other foreign coaches.

Former Zambia coach Renard, currently the head coach of Saudi Arabia, is the first coach to win the African title with two different nations when he led Zambia to glory in 2012 and succeeded again with Ivory Coast three years after.

The Frenchman qualified Saudi Arabia for the forthcoming World Cup in Qatar, and lost only twice (against Japan and Jamaica) in the 23 matches in charge of the Green Falcons.

In January, the NFF confirmed that Portuguese Peseiro will take charge of the Eagles after the 2021 Africa Cup of Nations but talks broke down due to financial clauses in the proposed contract.

“After several weeks of negotiations, during which there was news from the Nigerian Football Federation, that I would be the coach of their team, from the end of AFCON 2021, a fact that I never confirmed, and these did not materialize due to disagreement regarding contrarian clauses and financial matters,” the 61-year-old Peseiro wrote on Instagram.

He had previously worked at Panathinaikos, Real Madrid, Sporting Lisbon, Al Ahly, Braga and most recently as the Venezuela national team coach – a position he left in August 2021 over unpaid salary.

Meanwhile, the Technical and Development Sub-Committee of the NFF saddled with the responsibilities have till Sunday to make recommendations to the Executive Committee on the new coaching crew for the Super Eagles.

“The Executive Committee mandated its Technical and Development Sub-Committee to, within the next five days, make recommendations to the Executive Committee on coaching crews for the Super Eagles, the CHAN team, the U-20 Boys and the U-17 Boys ahead of upcoming assignments,” the statement reads in part.

“This is to ensure preparations for the next qualifying tournaments and championships commence in earnest.”

The Minister of Information and Culture, Lai Mohammed,