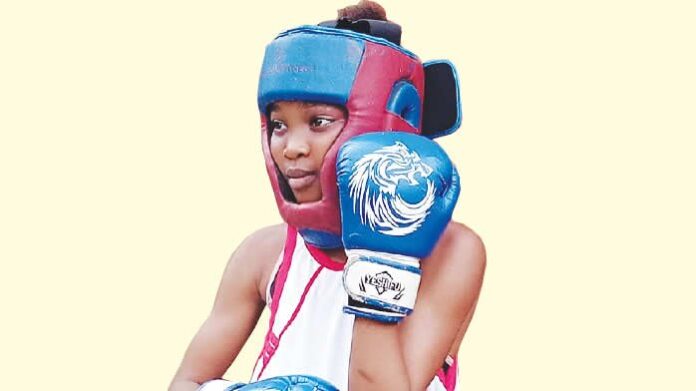 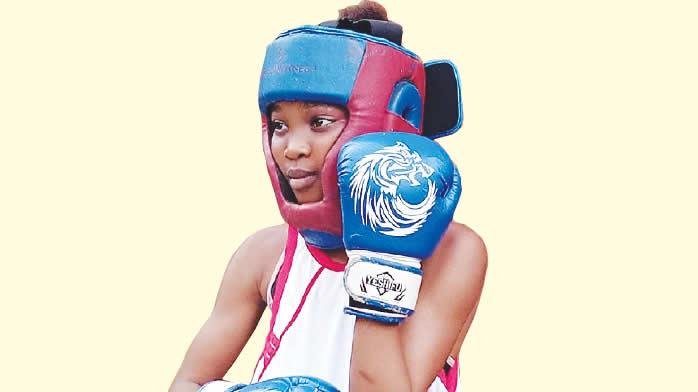 Maria Ademodi is the latest female boxing jewel in the country. At the age of 12, she has gone unbeaten in 15 amateur bouts against boys her age and is still in search of glory, JOHNNY EDWARD writes

Watching Maria Ademodi dance around the ring, overwhelming her male opponents with sheer speed, dexterity at Amaechi Boxing Ring, Iyana-Odo, in Iyana-Ipaja area of Lagos, was baffling, to say the least.

At 12, the female boxer has been driven by a desire to make a name for herself in Nigerian sports. And for her, the only way to achieve this is by punching her way past male opponents on her way to the top, in a country that often restricts its female citizens from participation in certain tasks, including sports.

At such a young age, she knows the difficulty in making a career in boxing locally, but she isn’t deterred. Her aim is to compete in as many fights as possible on the home front, which would help boost her chances of realising her dreams.

Ademodi, who hails from Ondo State, exploded onto the boxing scene when she was just six years old. But in recent weeks her fight videos on YouTube have surpassed millions views.

Though still light years ahead, she isn’t giving up and even risked putting herself at odds with more conservative members of her family and community, when she started boxing in 2016.

“I was six when I started boxing. I went into it because of self defence and also to make a career out of it. I have fought 15 times since I started and I never fought a girl before. All my opponents have been boys. My day starts with jogging, shadow boxing and skipping before I go to school,” Ademodi told Saturday PUNCH.

“I have never lost a fight since I started boxing. I usually asked my prospective opponents when they started boxing, so I would know their level before engaging them.”

But she met a brick wall on the home front. Her parents, especially her mother, objected to her becoming a boxer because she didn’t want her daughter to suffer bruises.

“Actually, I didn’t encourage her because I found it a bit odd for a female child to learn boxing because I was scared,” Ademodi’s mother Temitope told Saturday PUNCH.

“I wanted her to learn how to play football or become an athlete. Her father was always eager for her to wake up early to attend trainings but I seldom refused because she was too young, but at some point I had to encourage her because she started very early just before her sixth birthday.”

But Temitope admitted she was scared stiff when she first went for her daughter’s fight. Behold, it was against a male opponent eight years older!

“I was so scared that he would get her injured but the bout ended in a draw,” she said. “That experience made me believe she could succeed in the sport.”

But the strong-hearted Ademodi said her mother’s initial resistance and challenges only served as motivation for her.

“Getting into boxing was a challenge to me and my family at first. It was very challenging, but these obstacles only motivated me to go forward.

“Thank God and thanks to my family’s support now, I was able to stay motivated and push forward and develop in boxing.”

David, Ademodi’s father, said boxing ran in his family, a major reason he supported his daughter.

Ademodi has three siblings, two of whom are also boxers, with only the last child, a four-year-old, yet to be involved in sports.

“I love boxing because my grandfather was a professional boxer in Ondo. So, I was very happy when my daughter told me she wanted to learn boxing and gave her all the support she needed to start training.

He urged other parents to encourage their wards who love to go into sports.

“Parents who find out that their children are into sports should encourage them because you never know if their talents will help them excel.”

So, what’s her weapon against male opponents? Speed, she says.

“Too much speed kills in driving, but my coach told me that I needed that quality to excel in boxing,” Ademodi added.

She trains for four hours during weekends, in her most comfortable favourite pair of red boxing gloves.

However, she’s devised a means to combine education and sports: when not training, she spends time learning, especially mathematics, which she admitted gives her headache in school.

“My male classmates tease me, saying I’m only good at boxing boys but very poor in maths, so I dedicate a lot of time studying the subject,” she stated with a smile.

“I usually devout more time to study the subject because passing it will help boost my chances of gaining promotion to the next class.

The JSS 3 student of Azolad High School also admitted that it has been exciting combining education and boxing together.

“It has been fun because boxing does not affect my studies. I train only on weekends (Saturday and Sunday) so it is easy for me to cope but the rigorous exercises which could be exhausting sometimes. “I like my coach he gives me break when he sees I am tired but he is always strict on me when I shadow-box, skip and run and spar.

She also revealed that her boxing prowess came to her aid when she had to defend her female classmate from a boy who tried to bully them after school.

“That happened once after school,” she said.

“Some boys tried to bully my friend whom we normally go home together but I stepped in and while one of them took to his heels, the other boy wanted to fight me but I just guarded myself because one of the boxing rules states ‘no street fights’. The boy was not sure if I will fight him but deep down me I knew I had to defend myself if he punched me.

Recounting her first ever fight, Ademodi revealed she had a scar under her right eyebrow and swollen faces but her opponent suffered more damage to his face.

“At that competition, there was no girl to compete with in my category so I was paired with an eight-year-old boy to fight. I was scared at first but when the fight started I grew in confidence.

“He was very good and it was difficult for me to land my punches on him at first.

“The punches he landed hurt me and he used more of head buts which made gave me a scar and my face swollen. I did my best to also ensure that I recorded good points to win but at the end the judges called the fight a draw.

“That fight really gave me courage that I can go into boxing. I received lots of encouragement and money from people who came to watch the fight that day.

“Since then, I have remained undefeated.”

Ademodi’s confidence has seen her aspire to become the next Nigerian boxing great in the women category.

Since women started boxing in Nigeria in the 1980s, attitudes towards women who engage in the sport have changed dramatically, bridging the gap of gender equality in the country.

Egbunine competed for seven years from 2004 to 2011. During that time, she fought 19 times and recorded 17 wins – 10 of which were knockouts and two losses – to Nikki Eplion and Laila Ali. She also held the WIBF light-heavyweight title in 2006.

“It is my dream to represent Nigeria if I get the chance someday but I know I have to work harder. I want to be a world Champion in boxing someday and I believe with the help of my family, my coach and my country I will achieve it. I love defending people just like my dad. He hates peoples been deprived of their rights, so I hope to defend the colours of Nigeria when I attain that level.”