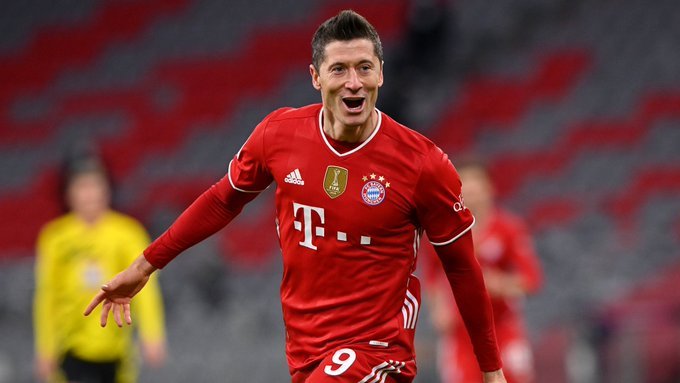 A late Robert Lewandowski penalty spared Bayern Munich after a below-par performance in a 1-0 home win over Augsburg on Saturday, three days before their crucial Champions League tie against Villarreal.

Bayern struggled at the Allianz Arena until a handball by Augsburg defender Reece Oxford resulted in the penalty which Lewandowski tucked away eight minutes from time.

Bayern host Villarreal on Tuesday in their Champions League quarter-final second leg, having lost the first match 1-0 away last Wednesday.

“The first half was not good from us,” said Bayern midfielder Leon Goretzka. “The intensity was missing.

“We will have to improve on Tuesday — and that’s what we will do.”

Lewandowski has netted 32 league goals this season, leaving him poised to be the Bundesliga top-scorer for the fifth consecutive campaign.

Thomas Mueller reached the milestone of 300 Bundesliga wins, a record for a player at a single club.

Yet the milestone stats failed to disguise Bayern’s poor display.

In the wake of Wednesday’s first-leg defeat at Villarreal, Bayern coach Julian Nagelsmann said he had no more “tolerance for wobbles and slip-ups”.

Yet until Lewandowski’s spot-kick, this was another disjointed, stuttering performance from Bayern in their tune-up for Tuesday.

Bayern barely created a shot in the first half under pressure from Augsburg who stunned the Bavarian giants when the clubs met last November.

Teenager Jamal Musiala came on at half-time, before wingers Alphonso Davies and Kingsley Coman also came off the bench.

The injection of pace paid off as Bayern looked far more dangerous.

Kimmich forced a superb diving save from Augsburg goalkeeper Rafal Gikiewicz with an hour gone.

After the ball clipped Oxford’s hand from a cross, Lewandowski secured the three points.

“We’re in a phase of the season where we don’t have to shine, just win,” added Nagelsmann.

Elsewhere, Cologne boosted their hopes of European football next season by coming back from behind to grab a 3-2 home win over Mainz.

Goals by Jonathan Burkardt and Karim Onisiwo put Mainz 2-0 up early in the second half before goals from Ellyes Skhiri and Dejan Ljubicic drew Cologne level.

Cologne are seventh, just one point outside the European places.

Wolfsburg ended a run of three defeats with a 4-0 home win over Arminia Bielefeld, who saw defender Cedric Brunner had to be stretchered off following a horrific head injury.

Borussia Moenchengladbach pulled away from the relegation battle and into mid-table with a 2-0 win at bottom side Greuther Fuerth.