Sponsors of atrocities in S’East will be exposed 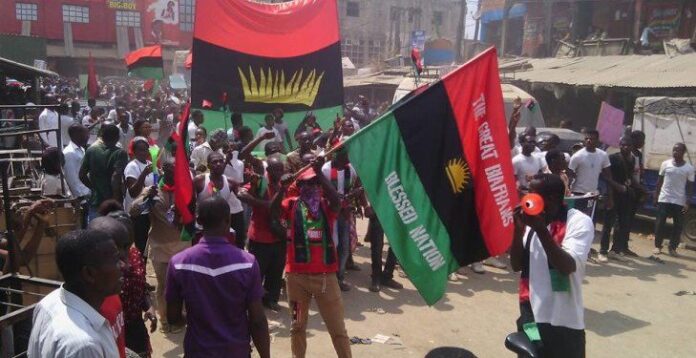 The Indigenous People of Biafra has said that the sponsors and perpetrators of atrocities in the South-East will soon be exposed as the authentic arm of the group is all out to do so.

The group accused politicians of importing criminals and hoodlums into the region to carry out an evil agenda. It equally stated that those behind the killings and insecurity were not IPOB members.

In a statement on Saturday, the Media and Publicity Secretary, Emma Powerful, said that the atrocities were witnessed in the states where politicians were fighting themselves for selfish reasons.

Powerful stated that IPOB had no business with the unknown gunmen, and would soon expose those behind the atrocities.

He said, “We will expose those behind the killings in the whole land of Biafra in no distance future. Those behind this barbarity are not IPOB members or ESN operatives.

“We totally condemn the killing of the six innocent women in Imo State by hired hoodlums as they shared rice presented by the governor. We must fish out the perpetrators of this heinous crime against our mothers.”

He pointed out that IPOB had been pursuing freedom for the people of the region for nine years without involving in any act of criminality.

The statement read in parts, “We strongly condemn the recent attacks on Nnewi South LGA, the burning of the country home of Ohanaeze Ndigbo President, Professor George Obiozor, and the attack on the palace of HRH Igwe Anayo Obika of Ezinfite. Those behind these devilish acts will regret their actions.

“We advise our people to be circumspect in this political season as enemies of Biafra have schemed different ways of causing havoc in our land and blaming it on IPOB and Biafra agitators to further demonise us. “Everybody should be wise and vigilant. IPOB doesn’t spill blood. Anybody staging an attack anywhere has nothing to do with IPOB.

“The insecurity and killing of our innocent citizens are unacceptable by IPOB worldwide and we must bring down those behind these devilish activities.

“IPOB is a peaceful movement and will maintain discipline until Biafra is finally achieved. The killing of our people must stop whether or not the criminals want it. IPOB is fighting  to liberate our people from the bondage of Fulani terrorist nation called Nigeria.”