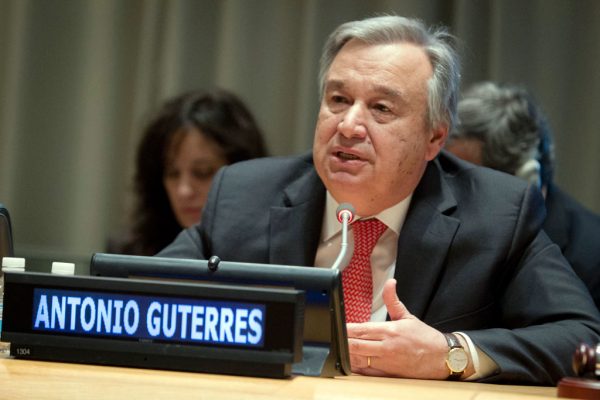 The United Nations Secretary-General, António Guterres, has condemned reported Russian missile attack on a railway station in eastern Ukraine that killed dozens of civilians, including children.

Guterres, in a statement on Friday by his spokesperson, Stephane Dujarric, said the strike – and others against civilians and civilian infrastructure – were “gross violations” of international law.

The Secretary-General said the strike on the Kramatorsk railway station in eastern Ukraine, which killed and injured scores of civilians waiting to be evacuated, “including many women, children and elderly,” was “completely unacceptable.”

Guterres reminded all parties of their obligations under international law to protect civilians, and of the urgency to agree on humanitarian ceasefires in order to enable the safe evacuation of, and humanitarian access to, populations trapped in conflict.

He reiterated his appeal to all concerned to bring an immediate end to this brutal war.

Similarly, UN Crisis Coordinator for Ukraine, Amin Awad, said many had suffered terrible injuries at the railway station and that the number of fatalities was likely to rise.

“It was widely reported over the last two days that the station and surrounding area had been full of civilians attempting to flee intensifying hostilities.

“We are extremely disturbed by the reports of children, women, the elderly and people with disabilities – the most vulnerable people in the Kramatorsk area – who were caught up in this attack,’’ Awad said in a statement.

Awad said the use of explosives, “with wide area impact in populated areas is a clear violation of international humanitarian law.

“All military forces, in all conflicts, must not carry out attacks on civilians and civilian infrastructure. They must do their utmost to protect civilians.”

He added that hospitals in the surrounding area were now full of casualties.

“We and our humanitarian partners are ready to do anything we can to help those who are responding to the attack and those who have survived.

“We continue to call on all the parties to this conflict to allow safe and unimpeded passage for people who wish to leave, to prevent attacks on essential transportation for civilians, and for life-saving relief supplies to reach those unable to move or evacuate.”

The UN Children’s Fund Ukraine Representative, Murat Sahin, said the train station had been the main route out for thousands of families evacuating from Donetsk region, “which has seen some of the war’s worst destruction,” to relatively safer areas in Ukraine.

“Over the past week, UNICEF has delivered about 50 metric tons of life-saving supplies including medicines, water and hygiene kits to Kramatorsk to respond to rapidly deteriorating humanitarian conditions in the east.

“The UNICEF team was delivering life-saving supplies to the regional health department, a kilometre away from the train station when the attack took place,” he said.