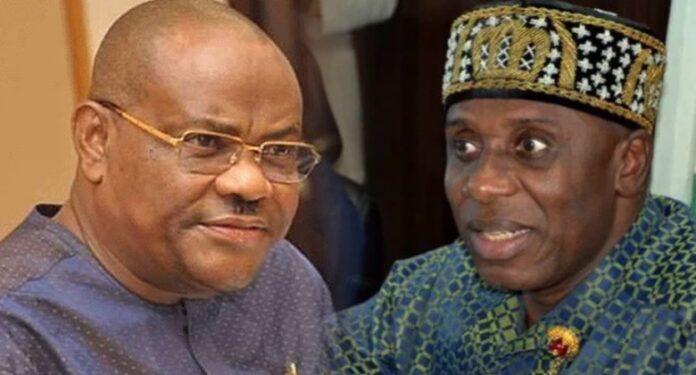 The kinsmen of the Rivers State Governor, Nyesom Wike; and the Minister of Transportation, Rotimi Amaechi, have hailed the two political leaders for declaring their interest to contest the 2023 presidential election.

The kinsmen, under the aegis of the Ikwerre People’s Congress Worldwide, a socio-political group, said it was a bold step taken by the two prominent Ikwerre sons on the platforms of the two main political parties, the All Progressives Congress and the Peoples Democratic Party.

The congress, in a statement jointly signed by its Chairman, Livingstone Wechie; Vice Chairman, Innocent Okocha; and Secretary, Stanley Worgu, said the development was unprecedented and a proof that Ikwerre has a lot to offer as a key ethnic nationality.

Thestatement read,” This is unprecedented because it proves that the Ikwerre nation has a lot to offer Nigeria as a key stakeholder ethnic nationality that has continued to contribute the highest human, natural and economic resources to the development of Nigeria.

“IPC recalls that both aspirants have made their indelible marks in their political journey and are eminently qualified respectively for the office of the President of the country.

“Nyesom Wike as Governor of Rivers State, has earned the admiration of his followers and indeed across the country through his landmark material achievements as the governor of Rivers State and this is reflected in his years as a local government chairman and minister of state for education.

“Rotimi Amaechi, on his part is today credited among others with the innovative revolution of the Nigerian rail transport sector, in addition to his giant strides and innumerable achievements as the then governor and speaker of the Rivers State House of Assembly, respectively.

“These historic developments from our great sons have brought to the fore the strategic importance of the Ikwerre nation not only to Nigeria but Africa and the world at large.”