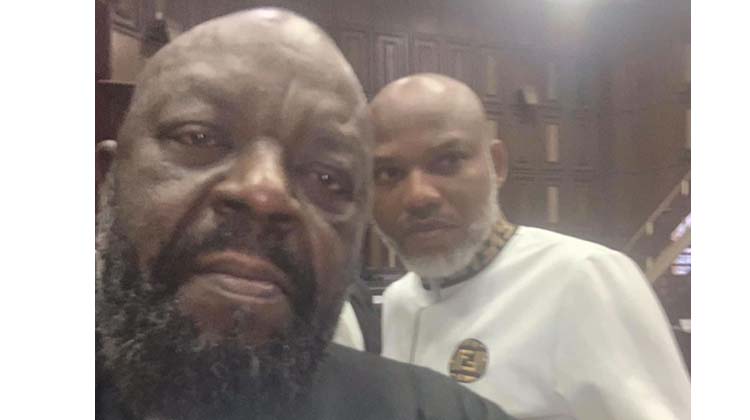 The leader of the Indigenous Peoples of Biafra, Nnamdi Kanu’s special counsel, Aloy Ejimakor, has faulted the new practice direction on terrorism trials issued by the Federal High Court.

The court had on Thursday issued a ‘Practice Direction’ barring journalists and members of the public from attending proceedings in terrorism-related cases.

But Ejimakor, in a statement on Sunday, described the new practice direction as “unconstitutional” and “unjustifiable”.

The statement read, “The new Practice Directions on terrorism trials recently issued by the Chief Judge of the Federal High Court is unconstitutional by the clear provisions of two subsections of Section 36 of the Constitution, which requires all trials to be in public.

“The second is subsection (4) of Section 36 of the Constitution which states that “Whenever any person is charged with a criminal offence, he shall, unless the charge is withdrawn, be entitled to a fair hearing in public within a reasonable time by a court or tribunal”.

“The only restrictions the Constitution allows is on a case-by-case basis and it must be narrowly tailored by the particular court or tribunal before whom the suspect is being tried, not by an omnibus Practice Directions that seeks to envelope every case in one fell swoop.

“The first narrowly-tailored exception can be found in Section 36, subsection 4(a) of the Constitution which states that “A court or such a tribunal may exclude from its proceedings persons other than the parties thereto or their legal practitioners in the interest of defence, public safety, public order, public morality, the welfare of persons who have not attained the age of eighteen years, the protection of the private lives of the parties or to such extent as it may consider necessary by reason of special circumstances in which publicity would be contrary to the interests of justice”.

“The second narrow exception is contained in Section 36(4)(b) of the Constitution, which states that “If in any proceedings before a court or such a tribunal, a Minister of the Government of the Federation or a commissioner of the government of a State satisfies the court or tribunal that it would not be in the public interest for any matter to be publicly disclosed, the court or tribunal shall make arrangements for evidence relating to that matter to be heard in private and shall take such other action as may be necessary or expedient to prevent the disclosure of the matter”.

“Thus, other than in the circumstances of the narrowly-tailored exceptions permitted by the Constitution, the new Practice Directions is ultra vires the Constitution. And it cannot be justified by a Terrorism Prevention Act that is unarguably subservient to the Constitution.”