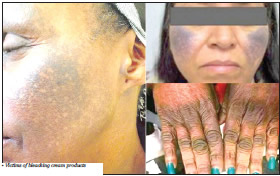 While skin bleaching – a procedure that entails using cosmetic products to lighten the skin has been around for some time, the recent ranking of Nigerian women as the highest users of skin bleaching creams in Africa in a study undertaken by Cable News Network has highlighted it is a widespread issue in the country despite the warning by experts that those engaging in bleaching are at risk of viral infections, kidney disease and other issues. However, some users of bleaching creams are lamenting the damage it has done to their skin and expressing regrets for using lightening creams. Angela Onwuzoo reports:

If you had seen my face before, you would have been angry at me for engaging in skin bleaching”, says Mrs. Gold Alfred, a 33-year-old woman, who is making frantic efforts to repair her face from severe burns left on it by bleaching creams.

Gold, who began bleaching her skin in August 2014, describes the practice as an exercise in futility as she wishes her face could go back to its original state.

The soft-spoken Abia State indigene, says she is full of regret for getting involved in skin bleaching even when God had already given her beautiful light skin.

The fashion designer said bleaching her skin was a big mistake in her life that has become nearly impossible to correct.

According to her, every effort to remove the burns on her face, in particular, has proved abortive despite applying different creams recommended to her including local concoctions.

The burns, she narrated, are gradually stealing her joy and self-esteem as she no longer feels comfortable going to parties and other social gatherings as a result of her looks and the way people often look at her.

Sharing her experience with PUNCH Healthwise, the woman said she had suffered a lot of stigma from neighbours and her customers as a result of the burns on her face.

“It all started in August 2014. I will not forget that year in a hurry. Actually, I have light skin. But I wanted to step up my colour and become fairer.

“So, I approached a friend who asked me to buy a particular brand of bleaching cream that was white in colour and then mix it with fresh aloe vera and use.

“Three weeks after I began applying the cream, I started experiencing itching on my face. So, I stopped using it and then went and bought another bleaching cream. One week later, the new cream worsened the situation as my face turned red because the itching became more severe.

“While I was battling to find a solution to the reddish looks, my face became dark two weeks after as a result of the severe burns.

“Initially, when my face began itching in the first week I started using the bleaching cream that I mixed with fresh aloe vera, I thought the itching was a sign that the cream was working.”

The troubled woman told our correspondent that she never knew that that choice would leave an indelible mark on her face.

Physicians say most skin bleaching products contain harmful ingredients like mercury and frequently applying these products to the body can mean exposing oneself to these harmful elements which increase the severity of the harm which can be caused by the products.

They noted that skin bleaching reduces melanin (a pigment that produces colour in human skin).

A Consultant Dermatologist and Venereologist at the Irrua Specialist Teaching Hospital, Irrua, Edo State, Dr. Sebastine Oiwoh, told PUNCH HealthWise in an exclusive interview that the damaging effects of using skin-lightening products were many, adding that the practice of skin-lightening should be discouraged.

The dermatologist said skin-lightening products were capable of wiping off the organisms that serve as soldiers to the skin, thereby leaving it unprotected and exposing it to infections.

Dr. Oiwoh noted that burns to the face caused by bleaching creams might be difficult to reverse.

According to the United Kingdom’s National Health Service, overusing skin-bleaching products can cause irreversible skin damage, and the skin might not return to its original condition even after bleaching has stopped.

Not aware bleaching creams will cause irreversible damage to my skin

Continuing, Gold said, “I was only bleaching my face because other parts of my body are fairer than it. Unfortunately, the cream left severe burns on my face within two months that I was introduced to it and eight years later, the burns have refused to go away.

“I have spent a huge amount of money to get rid of them and to have my face back to its normal state, all to no avail. I have applied different facial creams recommended to me by friends, patent medicine dealers, relatives, and neighbours, yet the burns are still there.

“I have also applied so many concoctions such as palm oil, engine oil, honey, garlic, pawpaw leaves, mosquito coil dust, water from washed rice, the list is endless. Despite all these applications, the burns are still there. I never knew bleaching creams could cause such irreversible damage to my skin.”

Lamenting the stigma that she faces as a result of the burns, the tailor recounted, “A lot of people make passing comments about me because of my face.

“And sometimes, it causes me big embarrassment and discomfort because of the way they react when they suddenly look at my face. I am just 33 but the burns have made me look as if I am 44.

The Manufacturers Association of Nigeria has expressed concern