I want to complete what APC started, Osinbajo declares for president 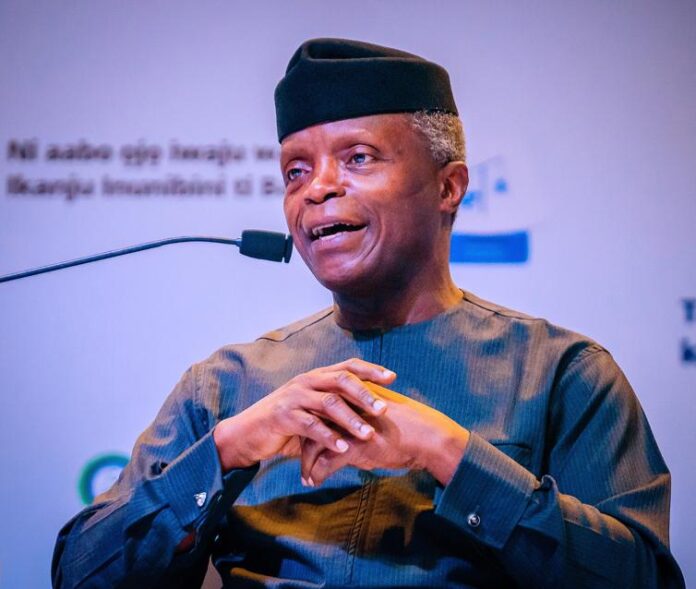 Vice-President Yemi Osinbajo (SAN), on Monday, formally threw his hat into the 2023 presidential ring, ending years of conjecture that he is interested in succeeding his principal, Major General Muhammadu Buhari (retd.), by May next year.

In a broadcast posted on all his verified social media handles, the All Progressives Congress member said he is running for the top Aso Villa spot to complete all that his principal and the ruling APC party started in May 2015.

Osinbajo, who turned 65 last month, is a senior advocate of Nigeria and a former lecturer at the University of Lagos. He is also a senior pastor with the Redeemed Christian Church of God.

He began his public office career in 1988 as an Adviser (legal advice and litigation) to the Attorney-General and Minister of Justice, Bola Ajibola, a position he held for four years.

The Vice-President was appointed Attorney-General of Lagos State in 1999 by then Governor, Bola Tinubu, and held the position till 2007, implementing several judicial reforms.

He was nominated as Buhari’s running mate in 2014 and was elected alongside Buhari in 2015. During his seven-year tenure as Vice-President, Osinbajo served as acting President for more than 120 non-consecutive days while his principal was on medical leave in London between 2016 and 2018.

Others in the APC who are rumoured to be nursing Presidential ambitions include: Ekiti State Governor and Chairman of the Nigerian Governors’ Forum, Kayode Fayemi; the Minister of Labour and Employment, Chris Ngige. The Governor of the Central Bank of Nigeria, Godwin Emefiele, is also considered a contender.

WHY I AM RUNNING FOR PRESIDENT, BY OSINBAJO

In the past seven years, I have served as Vice President under a true Nigerian patriot, a servant of the nation in war and peace, and a man of integrity, President Muhammadu Buhari.

We have, together, worked through some of the most difficult times in the history of our Nation, but we have remained focused on securing the country, providing infrastructure and growing our economy.

As stipulated by the Nigerian Constitution, our tenure will end next year.

In this period of seven years, I have served the government in several capacities, and have, at the direction of Mr. President, represented our country in sensitive high level international engagements. I have been to practically all local governments in Nigeria. I have been in markets, factories, schools, and farms. I have been in agricultural, mining and oil producing communities; in the Delta, in Kebbi, Enugu, Borno; Rivers, Plateau and Ondo; & in all other States of the Federation, listening to the diverse experiences and yearnings of our people

I have visited our gallant troops in the North East and our brothers and sisters in the IDP camps. I have felt the pain and anguish of victims in violent conflicts, terrorist attacks, flooding, fire and other disasters.

I have been in the homes of many ordinary Nigerians in various parts of the country. have sat with our techprenuers: in Lagos, Edo, and Kaduna, with our Nollywood and Kannywood actors, with our musicians, from Lagos, Onitsha, and Kano. And I have spoken to small and large businesses.

I stood where they stood and sat where they sat. I know their hopes, aspirations and fears, and I believe that in those hopes and aspirations are the seeds for the great Nigeria that we all desire.

I believe that the very reason why the Almighty God gave me these experiences, these insights, and these opportunities, is that they must be put to the use of our country and it’s great peoples.

Which is why I am today, with utmost humility, formally declaring my intention to run for the Office of the President, Federal Republic of Nigeria, on the platform of our great party, the All Progressives Congress. If by the grace of God and the will of the people. I am given the opportunity, then I believe that first, we must complete what we have started;

completing the reform of our justice system focusing on adequate remuneration and welfare of judicial personnel,

ensuring justice for all and the observance of rule of law,

providing an excellent environment for businesses to thrive,

making sure that the government, its agencies and regulators serve the business community,

creating a tech economy that will provide jobs for millions;

completing the promise of lifting 100 million Nigerians out of poverty within this decade,

completing the task of ensuring that all Nigerians, male and female, attend school,

reforming our educational system for relevance to the challenges of this century,

completing the task of universal health coverage for all,

strengthening the capacity of States and Local Governments to deliver on their respective mandates.

Above all, front and centre of our efforts will be the provision of jobs and opportunities for our young people.

I now most solemnly and respectfully seek the support of fellow Nigerians everywhere in this land, and the diaspora, young and old, male and female, in the great and exciting

I now most solemnly and respectfully seek the support of fellow Nigerians everywhere in this land, and the diaspora, young and old, male and female, in the great and exciting journey that we have ahead of us.

We will, working together, establish by the grace of God, the Nigeria of our dreams in a few short years. We will build on the foundation laid by our predecessors. We will need to move, with much speed, intentionality, and perseverance, towards the vision of a prosperous, stable, and secure nation.

I am convinced beyond doubt that we have the creativity, the courage, the talent, and the resources to be the foremost black nation on earth. Let us now birth the expectations of greatness conceived generations before us

Let us build a Nigeria where the man from Nnewi sees the man in Gusau as his brother, where the woman in Warri sees the woman in Jalingo as her sister, where the love of our nation burns alike in the hearts of boys and girls from Gboko to Yenogaa, Where everywhere, in this land, is home for everyone, where our diversities, tribes and faiths unite, rather than divide us.

Let our tribes become one tribe; the Nigerian tribe, where all are treated fairly, justly and with respect. Where all are given equal access to the abundant opportunities that God has bestowed on this nation. It’s time.