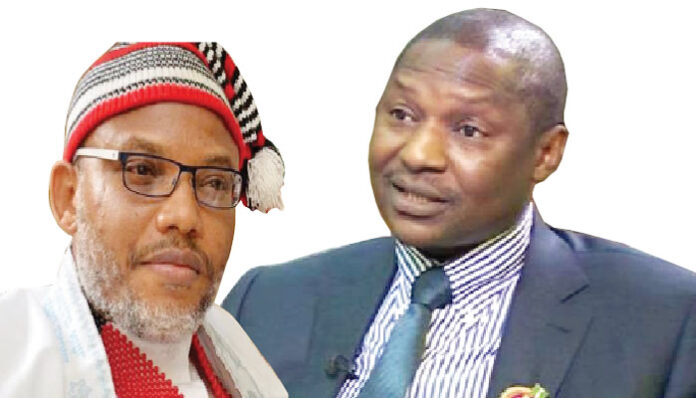 The leader of the proscribed Indigenous People of Biafra, Nnamdi Kanu, has petitioned the United Nations Security Council to establish an independent commission to investigate the alleged complicity of Nigerian and Kenyan government officials in the detention of the 54-year-old.

The letter was made available to The PUNCH on Sunday by Kanu’s Special Counsel, Aloy Ejimakor, and was signed by Fein and Kanu’s wife, Uche.

It was titled, ‘Re: Petition to the United Nations Security Council to establish an independent Commission to investigate the complicity of Nigerian and Kenyan government officials or their agents in the criminal kidnapping, torture, extraordinary rendition, and indefinite arbitrary detention of United Kingdom citizens Nnamdi Kanu from Nairobi to Abuja and for the establishment of a Special Tribunal outside either Nigeria or Kenya to prosecute the suspects identified by the Commission’.

It read, “We, the undersigned respectfully petition the United Nations Security Council, acting under Chapter VII of the United Nations Charter, to pass a resolution establishing an international independent investigation Commission to establish criminal responsibility for Nnamdi Kanu’s kidnapping, torture, and extraordinary rendition from Nairobi, Kenya to Abuja, Nigeria on or about June 2021, and indefinite, ongoing, arbitrary detention in solitary confinement thereafter by the Federal Government of Nigeria. The resolution should also establish a Special Tribunal to prosecute persons the Commission finds have been responsible for Nnamdi Kanu’s kidnapping, torture, extraordinary rendition, and arbitrary detention.

“Convincing evidence in the public domain, direct and circumstantial, implicate Nigerian President Muhammadu Buhari, Nigerian Attorney General Abubakar Malami, and Kenyan President Uhuru Kenyatta, among others, in the above-referenced crimes against Nnamdi Kanu. The governments of Nigeria and Kenya cannot be trusted to investigate or prosecute themselves. The universal legal principle that a person cannot be a judge in his own case applies here.

“We submit that Security Council Resolution 1595, which established an independent Commission to investigate the assassins of former Lebanese Prime Minister Rafik Harari, and Security Council Resolution 1757, which established a Special Tribunal for the prosecution of the responsible parties found by the independent Commission, should be considered as templates for the corresponding resolutions we are requesting for investigation and prosecution of the crimes against Nnamdi Kanu by Nigerian and Kenyan government officials or their agents.

“We would welcome the opportunity to meet with you or your staff in person or over the internet to further elaborate on this petition.”

Kanu has been in the custody of the Department of State Services since June 2021 when he was brought back to the country and has seen been re-arraigned before Justice Binta Nyako for terrorism-related offences.