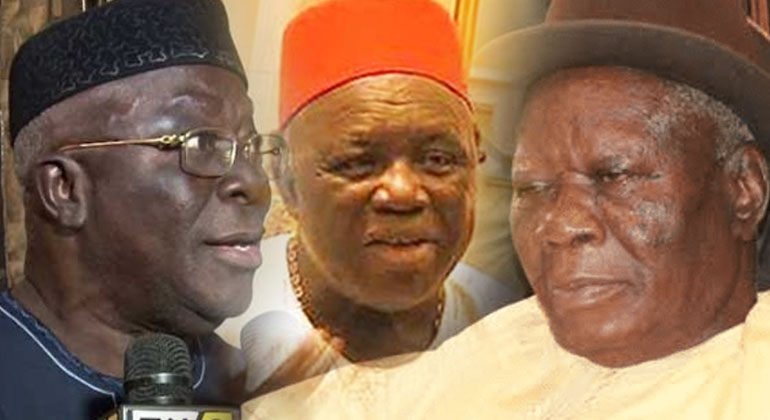 THE leaders of the major southern socio-political organisations under the aegis of the Southern and Middle Belt Leaders’ Forum have reiterated that Nigeria’s collective future depends largely on the decision of the leadership of the ruling All Progressives Congress and the Peoples Democratic Party, amongst others, to zone its presidential ticket to the South.

They warned that if the principle of zoning and rotation of power between North and South was scrapped by the parties, the country should ‘go back to what we were before the amalgamation of 1914.’

This was made known in a communiqué titled ‘Do not jettison zoning, SMBLF cautions PDP’, jointly signed by the leader of the forum, Chief Edwin Clark; the President-General of Ohanaeze Ndigbo Worldwide, Prof George Obiozor; President of the Middle Belt Forum, Dr Pogu Bitrus; and the National Leader of Afenifere, Chief Ayo Adebanjo, and made available to The PUNCH on Monday.

The leaders further stressed that any attempt to “perpetuate a northern presidency through unnecessary intrigues and conspiracies after the eight years of Major General Muhammadu Buhari (retd.), because of a hypothetical majority, would no doubt heighten the dissension in the country.”

The communiqué read, “The Southern and Middle Belt Leaders’ Forum is dismayed by the purported recommendation of the 37-member PDP Zoning Committee to throw the party’s 2023 presidential ticket open to all parts of the country and the justifications afterwards.

“The said conclusion of the Governor (Samuel) Ortom-led Zoning Committee is disgusting, unfair and unacceptable.

“Still, it is also a purveyor of discord. Accordingly, SMBLF urges the National Executive Committee of the PDP to reject outright the recommendation.

“SMBLF cautions the PDP not to violate its principle of zoning and rotation of power between the North and the South, noting that the founding fathers of the party and the framers of its constitution, in cognisance of the nation’s diversity, and in line with the federal character principle, rightly provided under Section 7, Sub-section 3C, that there should be a rotation of party offices and elective offices, not only to promote equity, fairness and justice but equally to avoid the preponderance of persons from any particular section or ethnic group of the country in the running of the affairs of the party and the government of Nigeria as we have today, in the one-sided government of Major General Muhammadu Buhari (retd.).