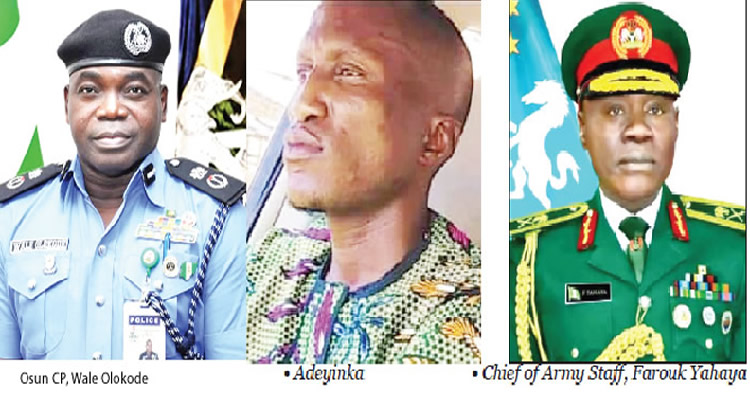 The Osun State Police Command on Monday said military police from Ibadan, Oyo State, have arrested the soldiers involved in the killing of a car dealer, Adeyinka Adekunle, at the Army Barracks, Ibodi, Osun State.

Adeyinka, 37, died after he was allegedly tortured by soldiers from the Ibodi Barracks on the orders of one Lt. Tobi Akindapo.

The deceased and a friend, Solomon Ogundare, had gone to a relaxation spot in the Imo area of Ilesha on March 24.

A disagreement broke out shortly after three soldiers, who were in mufti, begged the friends for drinks and they refused.

As the altercation degenerated to a fracas, one of the military officers phoned the Ibodi barracks and soldiers stormed the area.

While Adeyinka escaped from the scene, his friend was caught and taken to the barracks.

The soldiers caught Adeyinka the next day when he went to the barracks in the company of his friend’s sister, Elizabeth Itunu, to secure the release of his vehicle and Ogundare.

Itunu, in an interview with PUNCH Metro, said the soldiers tortured Adeyinka and Ogundare in her presence.

She said despite pleas for the men to be released, the military men refused and demanded N500,000 for the release of Adeyinka’s car which they towed to the barracks after he escaped from the scene.

Both men were kept in the guardroom that night.

The woman said when she returned to the barracks the following day, she met the friends cutting grass, as the soldiers whipped and kicked them.

“I observed that Adeyinka was very weak. He suddenly fell. They thought he was pretending and they started hitting him. When they saw that he was not moving, they checked his body and their boss said he should be rushed to a hospital,” she stated.

Itunnu explained that her brother was put in a military truck, adding that she later heard that the car dealer died before he got to a hospital.

“At that point, I became afraid as I saw that my brother was not breathing well. Their commander asked us to take my brother to a hospital as well.

“My brother later told me that while he and Adeyinka were in the guardroom, he (Adeyinka) vomited. The soldiers then ordered him to start eating his vomit,” she added.

The deceased’s father, Pa David Adekunle, 79, while demanding that the soldiers be made to face the law, accused the Osu Divisional Police Officer, Ebenezer Akinsanya, of attempting to bury the case.

But speaking to our correspondent on Monday, the spokesperson for the police in Osun State, Yemisi Opalola, absolved Akinsanya of blame.

She recalled that the matter was first reported at the Ayeso Police Division, where the Ayeso DPO spoke to mortuary attendants on the phone to allow a soldier to deposit remains of the deceased in a morgue.

Opalola said the DPO explained that it was after the corpse was received at the morgue that police investigation revealed the role played by the soldier that took the body to the morgue.

She said, “The DPO of Osu mentioned by the family did not know anything about the incident because he was not notified of it. The military officer called the DPO of Ayeso because they knew each other and he told the DPO on phone that he wanted to deposit a corpse in the morgue (Wesley Guild Hospital, Ilesa), and the attendants refused to take it in.

“The DPO thought it was the corpse of a colleague of the military officer, since he wasn’t aware of the unlawful killing and moreover the case was not reported. He just told the mortuary attendants to accept the corpse since he knew him. That was how the police got involved in the case.

“By the time the police got to know about what really transpired, some military police from Ibadan had come and arrested the army personnel involved.”

On the petition written by the deceased’s family to the police, she said, “The CP and the Osun Police Command are working on that petition.”

Efforts to get the spokesperson for the 2 Division, Nigerian Army, Ibadan, Major Ikedichi Iweha, for comment proved abortive, as calls to his telephone line did not go through.

He had also yet to reply to a text message sent to him on the matter as of the time of filing this report.