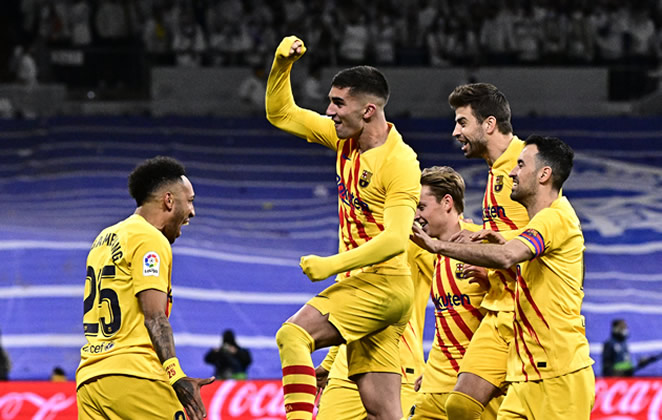 Barcelona have toiled at home in continental competition this season but they will need to find a way past Eintracht Frankfurt at the Camp Nou on Thursday if they are to reach the semi-finals of the Europa League.

The Catalans needed a second-half Ferran Torres strike to come from behind and draw 1-1 with Eintracht in Germany in the first leg of their quarter-final last week, leaving the tie open going into the return.

Barca have won just once at home in Europe this season, edging Dynamo Kiev 1-0 during their failed Champions League group-stage campaign.

Since dropping into the Europa League — the first time they have taken part in the second-tier European competition since 2004 — they have drawn at home to both Napoli and Galatasaray before getting the job done in the return.

There may be no away goals advantage anymore, but current form makes Barcelona clear favourites to advance to the last four with Xavi Hernandez’s team unbeaten in 15 games, a run that has lifted them back up to second in La Liga.

That means they are unlikely to have to win the Europa League to return to the Champions League next season, but they still want to finish the season with silverware and are eyeing a place in the final in Seville on May 18.

Eintracht are in mid-table in the Bundesliga and have not won any of their last five matches but they have lost only once to Spanish opposition — against Real Madrid in the 1960 European Cup final.

Whoever emerges victorious at the Camp Nou will play either Lyon or West Ham United in the last four.

Those sides meet in France with their quarter-final tie also finely poised after a 1-1 draw in London, where West Ham held out despite having Aaron Cresswell sent off in the first half.

“We didn’t play well and we can only play much better next week,” said West Ham manager David Moyes after the first leg.

They will be without French international defender Kurt Zouma due to injury for the return against a Lyon side struggling domestically and who have fitness worries of their own.

Goalkeeper Anthony Lopes and midfield duo Houssem Aouar and Tanguy Ndombele all came off injured playing at the weekend and Lyon would be seriously weakened without that trio.

On the other side of the draw Rangers must overturn a 1-0 first-leg deficit as they play host to Braga at Ibrox, and the winner of that tie will face either Atalanta or RB Leipzig in the semi-finals.

– Tension -Meanwhile Leicester City go to the Netherlands to face PSV Eindhoven in the Europa Conference League hoping to progress to the first European semi-final in their history.

The teams drew 0-0 in England last week and the winner will face either Roma or Bodo/Glimt.

Jose Mourinho’s side lost 2-1 in Norway last week meaning they have not beaten Bodo/Glimt in three attempts this season.

That match was marred at the end by a scuffle involving Bodo/Glimt coach Kjetil Knutsen and Roma goalkeeping coach Nuno Santos. Both men have been suspended for what could be a tense return leg.

Marseille fans are not expected to travel to Greece for their team’s game against PAOK after violence among supporters marred the first leg in France, which OM won 2-1.

Greek authorities called on UEFA to ban away supporters, although in any case one leading Marseille fan group had already confirmed they would not attend the return.