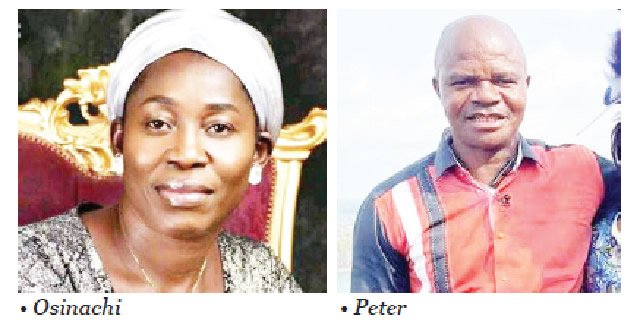 Police officers from the Federal Capital Territory Command on Tuesday visited the residence of late gospel singer, Osinachi Nwachukwu, in the Lugbe area of Abuja.

PUNCH Metro gathered that her husband, Peter, was brought in handcuffs to the house as part of ongoing police investigations.

Osinachi died on Friday in an undisclosed hospital after being admitted for days.

On Sunday, Peter was arrested after the younger brother of the deceased reported at the Lugbe Police Division.

On Monday, the case was transferred from the police division to the State Criminal Investigation and Intelligence Department.

A source said, “Osinachi’s husband was brought home today (Tuesday) in handcuffs to provide evidence to back his claims.

“He was brought home because he insisted that he did not kill her. He said his late wife was sick and he took her to different hospitals, including the Gwagwalada teaching hospital for treatment. They brought him to provide what he could use to substantiate his claims.”

The FCT Police Public Relations Officer, Josephine Adeh, confirmed that the police were at the house.

She said, “We went to his house as part of our ongoing investigation on the matter. You don’t expect us to keep him in our custody and go about with the investigation.”

Meanwhile, Deborah Enenche, the daughter of the General Overseer of Dunamis International, where the deceased was a lead singer, has vowed to ensure that justice is served in the matter.

A statement she signed on Tuesday partly read, “I believe she not only passed on due to the compendium of physical hurt and pain, she died of a broken heart. I will personally do my best to ensure that the offending party in the equation is punished to the fullest extent of the law. He will not go scot-free.”