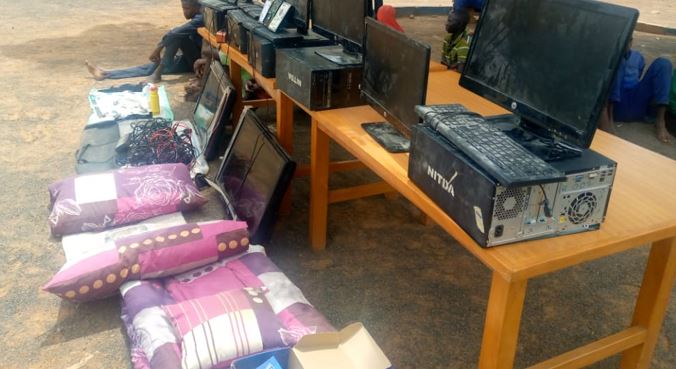 The police in Adamawa, following its sustained efforts to rid the state of crime and improve public safety, burst the activities of the crime syndicate, which also led to the recovery of one Audi vehicle, six computer sets, and two television sets, hard drugs, among others.

The suspects, during their interrogations, confessed to committing offences which ranged from house to house robberies within Yola  North and South local government areas, as well as the rustling of 34 cows, among other crimes.

The new Commissioner of Police in Adamawa state, Sikiru Akande, had,  while resuming his duty post, pledged to rid the state of criminal elements.

On Thursday, in Yola, while parading the criminals, Akande again assured of the readiness of personnel of the force of sustaining the efforts by the command to rid the state of criminal elements.

He said, “Having assured the good people of Adamawa state of sustained efforts by the police in fighting crimes, improving public safety and security across the state in the year 2022. The command’s operatives attached to State CID and Crack Squad, during the week, disconnected the network of an organised crime, apprehended 14 suspects, and recovered one Audi vehicle,   six computer sets, two TV sets, and hard drugs among others.

CP Akande, who had since ordered thorough investigations to ensure the criminals faced the full wrath of the law, equally commended operatives under the command over the arrest of the criminals.

He equally directed all the divisional police officers to intensify intelligent led-policing, sustain collaboration with members of the public, dominate the public space and deny hoodlums the opportunity to regroup anywhere within the state.