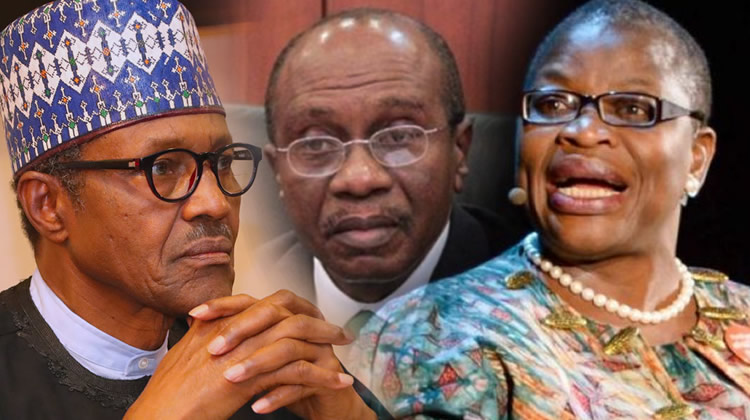 Nigeria’s former Minister of Education, Oby Ezekwesili, has faulted the response given by the Central Bank of Nigeria’s Governor, Godwin Emefiele, over calls for his resignation.

Many Nigerians, including the former education minister, had asked Emefiele to resign his position as CBN governor or be sacked by the President, Major General Muhammadu Buhari (retd.), over his presidential ambition.

There had been reports that the All Progressives Congress Expression of Interest and Nomination forms were purchased for Emefiele to contest the 2023 presidential election by his supporters.

A coalition comprising Rice Farmers Association, Emefiele Support Group and Friends of Godwin on Friday reportedly obtained the forms for him.

The CBN governor earlier denied having an interest in the presidential race but made a U-turn on Saturday.

In his response to the public outcry that greeted his purchase of nomination forms, Emefiele said he would decide on whether to contest or not in a few weeks.

Ezekwesili asked the CBN governor to stop embarrassing Nigeria by resigning his position.

She said this in a seriea of tweets on Saturday.

She posted, “I just read your waffling neither-here-nor-there tweet reacting to news of your payment of N100M for the APC Nomination form for 2023 Presidential election. Seems you did not read what the APC Spokesperson said to ⁦
@Bloomberg. Resign. Stop embarrassing the country. Stop.

“@GodwinIEmefiele, this is for you. Time to end your low-grade hide and seek game that dangerously toys with the monetary authority of this country and its people. Resign.

“It is legitimate aspiration to seek to be President of Nigeria but resign from
@cenbank to go pursue it.”

Reacting through his verified twitter handle, Emefiele said that, should he decide to contest for the political office, he would prefer to use his personal resources.

He said, “I am humbled by the growing interest of those asking that I run for the office of president in the 2023 general elections: I have not come to that decision.

“I note and salute the sacrifices of those farmers and patriots going as far as raising personal funds
and offering me presidential nomination forms: I thank them most profusely.

”However, should I answer their calls and decide to seek presidential nomination, I will use my own hard earned savings to buy my own nomination forms.

“I will do so without proxies, in an open and transparent manner in full compliance with the laws and Constitution of The Federal Republic of Nigeria,” he said.

He said that he would continue to serve the country in his capacity as CBN governor until he received divine counsel to contest for a higher office.

“I will continue to serve and sacrifice for the good people of Nigeria under the able leadership of President Muhammadu Buhari.

“This is a serious decision that requires God’s Divine intervention: in the next few days The Almighty will so direct,” he said.