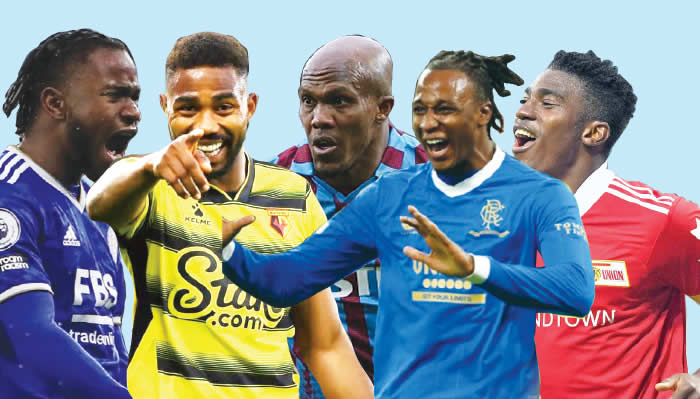 It was a bittersweet weekend for Nigerian players in Europe this weekend, with some suffering relegation, while others celebrated trophies, goals, assists and European qualification, reports KELVIN EKERETE

Alex Iwobi continued his impressive form under manager Frank Lampard in Everton’s 2-1 win over Leicester City in the English Premier League Sunday, as the Toffees continue their battle to survive the drop at the end of the season.

Iwobi provided the assist for the first goal as early as the sixth minute, switching from the right part of the pitch with a high pass, which was volleyed in by Vitaliy Mykolenko. Aside from his impressive display in the offensive end of the pitch, he was also defensively solid for the Toffees, with Lampard deploying a five-man defence.

Everton are currently 16th on the log, one point above the drop zone, but with a game in hand.

For Leicester, Kelechi Iheanacho was on for the entire duration but fired blanks. His compatriot Ademola Lookman came on for Patson Daka in the 80th minute.

Emmanuel Dennis couldn’t hit target on Saturday as Watford were relegated from the English Premier League with three games to spare after their 1-0 loss to Crystal Palace.

Wilfried Zaha scored the only goal of the game from the spot in the 31st minute, with 10-man Hornets playing second fiddle all 90 minutes.

Dennis came off for Adam Masina in the 73rd minute.

William Troost-Ekong made his first appearance for the club since January 15, coming on for Samir in the 78th minute, while fellow Nigerians Samuel Kalu and Oghenekaro Etebo were unused substitutes.

Ajayi provided an assist in West Brom’s 4-0 thrashing of Barnsley in the English Championship on Saturday. It was Ajayi’s second assist in 31 appearances for the Baggies this season. He also boasts a goal this term.

Ajayi made way for Caleb Taylor in the 62nd minute.

Sanusi scored a 94th-minute goal to earn FC Porto not just a 1-0 win over rivals Benfica, but the 2021/22 league title ahead of Sporting Lisbon, on Saturday.

The defender showed his electrifying pace as Porto turned defence into attack after a Benfica corner kick. The Nigeria international ran past his markers before volleying winger Pepe’s pass into the top right corner of Odisseas Vlachodimos’ goal.

It’s Sanusi’s third goal of the season in 23 league games for the Portuguese giants. So far, the 24-year-old has made 38 appearances in all competitions this season.

Winger Chukwueze was in action for 82 minutes as Villarreal were held 1-1 by Sevilla in the Spanish LaLiga on Sunday.

The Nigeria international was in the starting line-up for the Yellow Submarines and was cautioned for a foul in the fourth minute. He made way for Serge Aurier with eight minutes left.

Umar Sadiq scored his 17th league goal of the season in Almeria’s 3-0 win over Amorebieta in the Spanish Segunda league on Saturday. Andyoni Lopez’s own goal gave the promotion hopefuls the 54th-minute lead, while Srdan Babic made it 2-0 in the 75th minute. Umar scored Almeria’s third in the 89th minute, which saw them leapfrog Eibar at top of the league with two points. Eibar are now second after their 2-0 defeat to third-place Valladolid on Sunday.

Aside from his 17 goals, Sadiq has also provided 11 assists in 33 games, taking his direct league goals contribution to 28. He has received six yellow cards this season.

Ajibade was an unused substitute in Atletico Madrid’s 3-1 win over Eibar in Spain’s topflight Women’s Primera Division on Sunday.

Laia Lopez scored the opener for Atletico as Thembi Kgatlana made it 2-0, while Lopez Millan made it 3-0. Ajibade has scored 10 goals in 22 appearances this season.

Payne was in action for 83 minutes in Sevilla’s 3-1 win over Huelva on Sunday, before the Super Falcons star made way for Inma Gabarr.

She’s scored five goals with four assists in 28 games for Sevilla this season.

Chikwelu featured for 46 minutes but failed to inspire Madrid CFF, who lost 3-1 to Levante’s women’s side on Sunday. It was the midfielder’s 26th game of the season.

Forward Oshoala was an unused substitute as Barcelona Femini hammered Rayo Vallecano 6-1 away from home on Sunday. She has scored 20 goals in 17 games this season.

Victor Osimhen was in action for 90 minutes but fired blanks in Napoli’s narrow 1-0 win over Torino in an Italian Serie A encounter on Saturday.

The striker, one of the most sought-after players in Europe, has found the back of the net 13 times in 25 league appearances this season.

He made way for Andrea Petagna on the stroke of 90 minutes. Overall, the 23-year-old has scored 17 times in 30 appearances all season. His eye-catching performances has seen him being targeted by top Premier League sides, including Arsenal, Manchester United, Liverpool, Tottenham Hotspur and Newcastle United.

His compatriot Ola Aina was an unused substitute for Torino.

David Okereke saw just 11 minutes of action in Venezia’s 4-3 win over Bologna in the Italian Serie A on Sunday, but his countryman Tyronne Ebuehi was not listed for the game.

Okereke came on for Michael Cuisance in the 79th minute.

Moses Simon played a crucial role in Nantes 1-0 win over Nice, which saw them crowned the new Coupe de France champions on Saturday.

It was the Nigeria international’s final penalty that helped them get past Monaco in the semi-finals and the impressive performance landed him the club’s Player of The Month for April award. Simon started the game brightly and was a thorn in the flesh of the Nice defenders, and also had a couple of shots on-and-off target.

Simon made way for Osman Bukari in the 73rd minute of the win.

It’s Simon’s fifth trophy as a professional footballer, having previously won trophies in Belgium with Gent and in Slovakia with AS Trencin. The win also helped Nantes qualify for next season’s Europa League.

Super Falcons goalkeeper Nnadozie was in action for Paris FC but failed to keep a clean sheet as they suffered a 2-0 loss to Olympique Lyon in the French women’s top division on Sunday at the Groupama Stadium.

Nnadozie has made 20 league appearances for Paris FC this season, five more than she had in her debut season last term.

Okoye failed to keep his seventh clean of the season, but was instrumental in his side’s 2-1 win over Groningen in the Dutch Eredivisie on Saturday. He made four great saves to ward off attempts by the hosts. Despite still in the relegation zone, the performance of the Nigeria international has seen Rotterdam move from 18th to 16th on the log, giving them an opportunity to feature in the relegation play-offs. With two games to the end of the season, they still stand a chance of making it out of the relegation zone.  The keeper has conceded 39 goals in 28 league appearances.

Awoniyi provided an assist as Union Berlin beat Freiburg 4-1 in the German Bundesliga on Saturday, which earned the club a spot in Europe next season.

The striker should have scored Union’s first goal but his effort hit the bar, but he was, however, in the right place to provide the assist for Sheraldo Becker to grab Union’s third goal in the 41st minute of the encounter.

Awoniyi, who has scored 13 league goals this season, failed to add to his tally before he was replaced by Kevin Behrens in the 65th minute.

Super Eagles defender Kevin Akpoguma was an unused substitute in Hoffenheim’s 4-2 home loss to Bayer Leverkusen in the German Bundesliga on Saturday.

The 27-year-old was relegated to the bench after Hoffenheim lost 4-3 to Freiburg last week. He has 25 appearances for the German side, scoring two goals and providing three assists.

Afeez Aremu featured for 58 minutes in St Pauli’s 3-2 loss to Schalke 04 in the German Bundesliga II on Saturday. The former Akwa United midfielder was shown a yellow card in the 15th minute of the loss, before making way for Lars Ritzka, in his 21st game of the campaign.

Chidozie Awaziem was cautioned in the 49th minute of Alayanspor’s 2-1 win over Adana Demirspor in the Turkish Super Lig on Saturday.

It was Awaziem’s eighth warning of the season in 17 games this season. Awaziem, who has one goal this term, was replaced by Emre Akbaba in the 68th minute.

His compatriot David Babajide was not listed by Demirspor.