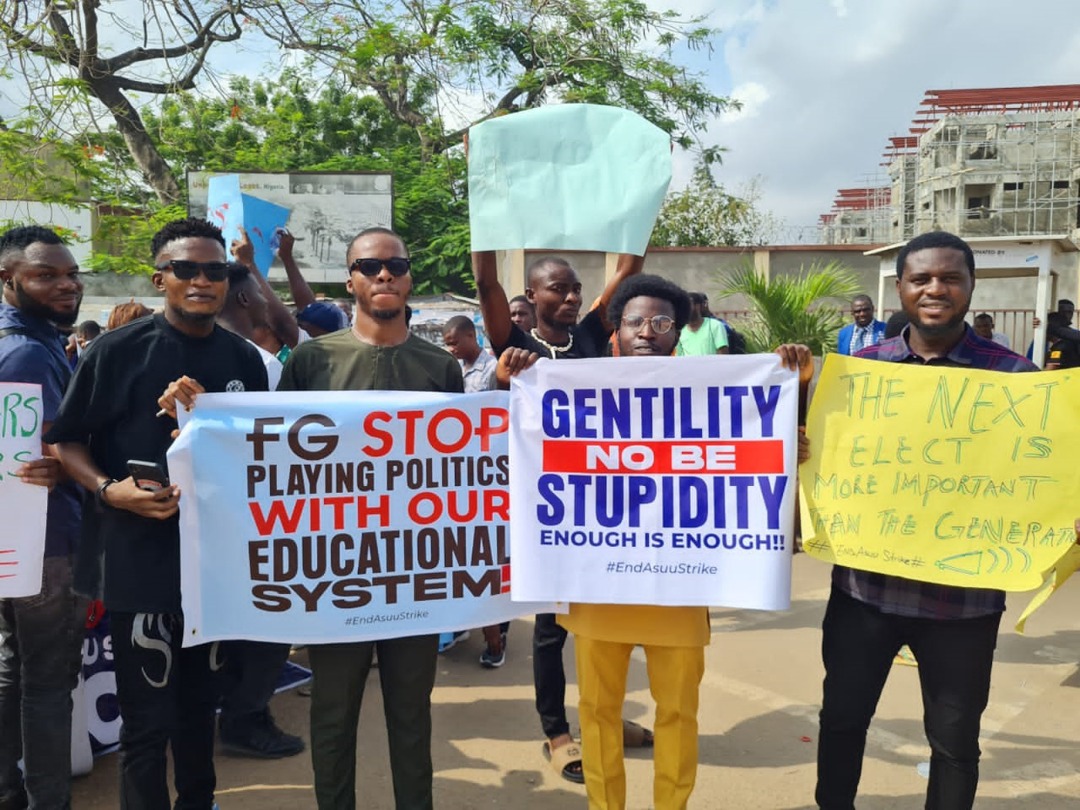 STUDENTS from various tertiary institutions in Edo State on Monday barricaded the gate of the Benin Airport, along Airport Road, in protest against the three-month extension to the prolonged strike by the Academic Staff Union of Universities. The resulting gridlock forced motorists to divert into the Government Reserved Area in search of alternative routes.

ASUU President, Prof Emmanuel Osodeke, had in a statement, after a meeting of its National Executive Council at the University of Abuja on Monday, announced the extension of the strike for another 12 weeks with a view to giving the Federal Government enough time to satisfactorily resolve all the outstanding issues between them.

While the Federal Government through the Minister of Labour and Employment, Dr Chris Ngige, stated that the government would resume talks with the lecturers this week, the union insisted that it was yet to get any official communication as regards the meeting.

The protesting students from the University of Benin; Ambrose Alli University, Ekpoma; and Edo State Polytechnic, Usen, were also at the secretariat of the Nigeria Union of Journalists, Edo State Council, to register their grievances.

The President of UNIBEN’s Students Union Government, Foster Amadin, said at the NUJ secretariat, “We are appealing to whosoever is concerned to help resolve this issue. We have also come to the NUJ secretariat as wise students who know the importance of the media to express our displeasure over the lingering ASUU strike.”

Also, students of the University of Lagos, Akoka, staged a protest against the ongoing ASUU strike.

The students displayed placards, and banners, calling on the Federal Government to wade into the crisis.

Meanwhile, the National Association of Nigerian Students has condemned the strike extension, saying the failure of the government to reach an agreement with ASUU underscored its lack of concern and empathy towards the plight of average Nigerians who could not afford private universities.

It however called on students across the country to occupy all federal roads for a minimum of three hours on Tuesday, saying this later include the disruption of party primaries and total blockage of the National Assembly complex and access to all airports.

NANS President, Sunday Asefon, in a statement titled ‘ASUU strike extension: The silence of the government and the ruling class; the nation must feel the heat’ in Ado Ekiti, the Ekiti State capital, said having exhausted all windows for constructive engagement with the government, NANS had declared national action from Tuesday.

He said, “The National Action is tagged ‘Operation Test Run’. It shall be held in all the 36 states of the federation. Federal roads across the 36 states shall be occupied for a minimum of three hours. The operation shall be a precursor to a total shutdown that will be decided during our senate meeting/pre-convention on Saturday, May 14, 2022. Our decision from the pre-convention shall be binding.

“Our proposal to congress on May 14 shall be the total blockage of the airport roads across the country and total disruption of political party primaries, blockage of the National Assembly until they are committed to passing legislation banning public office holders from sending their children to universities abroad.”

He warned those he described as “divisive elements or paid agents of government” to steer clear of the students’ actions while calling on the Nigeria Labour Congress, Trade Union Congress and civil society organisations to join the students to salvage public tertiary education.

Striking lecturers, not our workers – Ngige

The Minister of Labour and Employment, Dr Chris Ngige, has said enquiries about the ongoing strike by ASUU should be directed to the Federal Ministry of Education and the National Universities Commission, noting that his ministry is not the direct employers of the striking lecturers.

He said, “I have appealed to SSANU, NASU and NAAT to get back and open the universities so that when ASUU members come back, they will have a place to work. In the Ministry of Labour and Employment, we are conciliators and arbitrators.

“Those on strike are not our workers. Their direct employers are the universities and the Federal Ministry of Education. Any further queries on the ASUU strike should go to the Federal Ministry of Education and if possible, the National Universities Commission, who are their direct employers. We are here to conciliate them whenever either the employers or employees report to us that there is a breakdown in negotiations.”

Strike extension in the interest of students says ASUU

Speaking on the extension, the ASUU president said the decision of the union was in the interest of students and a way of rescuing the university system from further decay. The union has however asked its branches to hold congresses to deliberate on the next line of action.

He told one of our correspondents in an interview, “We also have students in school; Nigerians are not considering the plight of lecturers. A lecturer in Nigeria earns less than $600 a month whereas their counterparts in the United States earn almost $6,000, and you expect the other person to come and teach and believe everything is alright.

“We started this strike three months ago. They have held my salary all along. Am I not thinking about a family? This fight is for the students. If our colleagues in the press and Nigerians take up this struggle, we will go back to class. Our universities are dying and we are trying to rescue them. If fellow Nigerians say they are not interested, academic staff are interested and we will not allow the system to die the way primary and secondary schools died.”

ASUU stressed in the statement that the strike came on the heels of the government’s failure to satisfactorily implement the Memorandum of Action it signed with the union in December 2020 on the renegotiation of the 2009 FGN/ASUU Agreement; deployment of the University Transparency and Accountability Solution; Earned Academic Allowances;  funding for the revitalisation of public universities; proliferation and governance issues in state universities; promotion arrears; withheld salaries; and non-remittance of third-party deductions.

The Minister of State for Education, Emeka Nwajiuba, faulted claims by the union that the government had been idle as regards meeting the demands of the union. He said the union could continue negotiations without being on strike, adding that the Ministry of Education was not the direct employer of the striking lecturers.

Nwajiuba, in an interview with one of our correspondents, said, “Like I said in one of the videos trending, the Ministry of Education is not the direct employer of ASUU, every university has what is called a governing council. It is the council that employs you and when you are employed, you are transferred to the Federal Government.