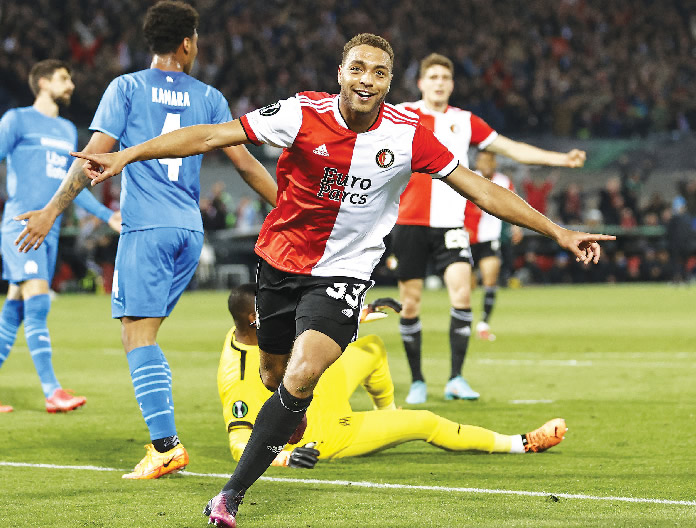 After PUNCH Sports Extra broke the news that Nigeria international, Cyriel Dessers, had scored a landmark 100 goals in his professional career on Monday, the in-form striker took to social media to celebrate the milestone.

“No better place to score your 100th official goal than in an exploding cockpit,” the striker wrote on Twitter.

Dessers hit the landmark in front of 47,500 spectators at De Kuip with another tremendous performance as he grabbed a brace which helped Feyenoord come from two goals down to tie 2-2 against title-chasing PSV in their week 32 Eredivisie clash on Sunday.

Dessers scored twice in the closing stages of the encounter to break PSV’s heart, who were cruising and closing the gap on league leaders Ajax.

The brace means the one-cap Nigeria international has now scored eight goals in the league and 20 across all competitions this season.

The 20-goal landmark is the striker’s best output in top-flight football, with his performance in the 2019/20 the closest, when he scored a total of 18 goals across all competitions.

Apart from reaching a season landmark, Dessers brace on Sunday against PSV means the striker has now reached a landmark of 100 goals in his entire career.

On Feyenoord’s poor first half display where they went two goals down, the 27-year-old refused to blame fatigue.

“I think it’s more of a mental thing. It just didn’t work in the first half. We didn’t get pressure on it, we were sloppy on the ball. But if you see what we do in the second half, how we get the upper hand and come back…”,

“Of course, they (substitutes) contributed, but I think it is mainly a switch that we turned on after a difficult first half. We can play football, we have also shown that.”

Dessers is currently this season’s Europa Conference League top scorer with 10 goals from 12 matches, a goal more than Roma’s Tammy Abraham, who they face in the final.