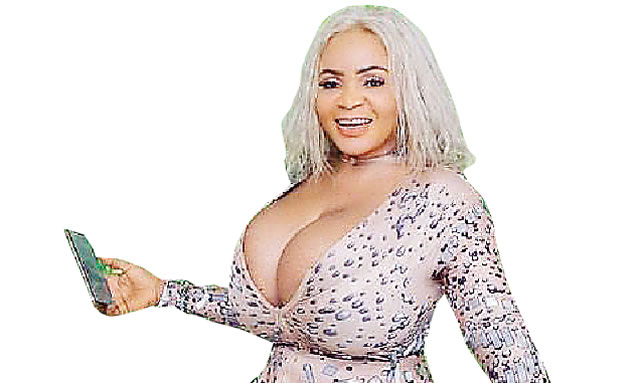 Nollywood actress, Cossy Orijiakor, has cried out in demand of justice, years after rumours of her having sex with a dog went viral on the Internet.

Back in 2002, Cossy’s career suffered a hit when a certain journalist, Tunde Moshood, alleged that the actress had sexual relations with a dog.

Moshood, the then publisher of Enquirer Magazine, also released footage of the actress where she appeared to be intimate with a dog, to back up his claim.

The movie star had constantly denied the rumour, explaining that the clip was a scene from the 2002 movie, Itohan, which tried to portray the precarious position of persons trafficked to other countries as sex slaves.

With renewed attention being paid to bestiality in the past weeks, the actress has called on law enforcement agents to revisit a report she made to them as regards the scandal which tanked her career in the last decade.

Recounting the experience via her Instagram page on Wednesday, Orijiakor said the rumours had resulted in emotional trauma and caused her to “lose her sense of purpose”

“Sometimes a lifetime award turns out to be a lifetime shame, that’s when Nigeria happens to you,” she wrote in the caption.

Tagging various handles of the Nigerian Police, she said, “I reported this case years ago. But I was just a naive girl, a nobody. It was all over the news. Cossy Orjiakor slept with Dog and got HIV. My image, emotional trauma, my career, everything went down the drain. I lost my sense of purpose. Up to date, no justice, no apologies. Nothing.”

Calling on the police to reopen her complaint, Orjiakor also referenced the case of a TikToker who is currently under investigation by the Nigerian Police after publicly claiming that she slept with dogs for money.

“It’s really an insult to me when the Nigerian police went after the girl on TikTok that jokingly said she slept with a dog. What about me that was in the magazine headline. Am I invisible?

“Please, solve this case and punish whoever is found guilty. Either Cossy, the girl that supposedly slept with dog, or Mr. Tunde Moshood of the ENQUIRER magazine, who is now a politician in Lagos state.

“The journalist that made millions from the story that broke me. Please, my Instagram family help me tag the right police handle because I lost hope in the Nigerian justice system. It still hurts. I want justice. Thank you,” she wrote.