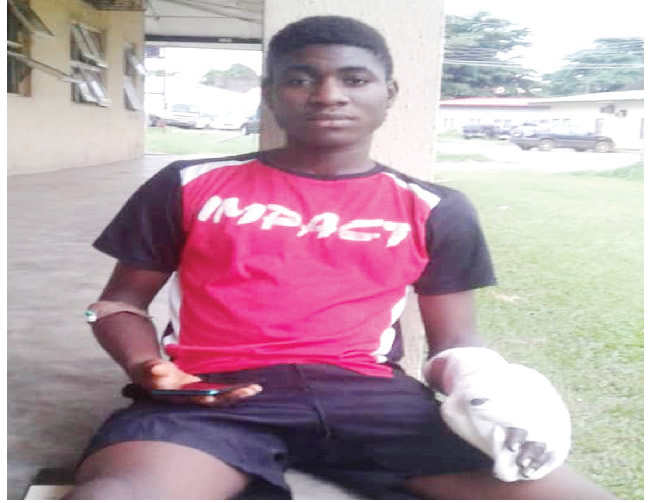 Twenty-two-year-old Daniel Kayode is on the brink of losing his left hand after suffering an industrial accident at a Chinese company, Swiss Polo,  Aseese, in the Obafemi Owode Local Government Area of Ogun State.

PUNCH Metro gathered that Daniel, an assistant supervisor, was working when one of the machines cut part of his left wrist and fingers.

Our correspondent gathered that while Daniel was writhing in pain as blood gushed out of his hand, some of his colleagues rushed him to the Springforth Specialist Hospital for treatment.

Daniel, while narrating his ordeal to our correspondent, said he was later referred to the Orthopaedic Hospital Igbobi, adding that his company abandoned him after he got to the hospital.

He said, “I work as an assistant supervisor in the tailoring section of the company. My job is to go to the cutting section to cut out materials for collation and to confirm if they are complete. But on April 26, 2022, while performing my duty, the machine I used to cut malfunctioned and it cut my wrist.

“I was immediately rushed to a nearby hospital. My mum visited me and we were told that I would undergo a hand study before surgery. I was told to deposit some funds but because I could not afford the money, I told my mum to request funds from the company.

“She later told me the company declined to fund my medical bill. During treatment, I passed out around 3pm, and when I woke up around 6.40am, I realised my hand had been bandaged. I was later transferred to the Igbobi Orthopedic Hospital.

“Since then, the company has abandoned me at the hospital. I underwent surgery on Friday, May 6, 2022. I feel helpless and unwell. It is the company’s duty to take care of employees who sustain injuries while working.”

Daniel’s mother, Grace, said a sum of N5m was needed for all the stages of her son’s surgery, adding that efforts to get the management to fund his medical expenses had proved abortive.

The widow said, “The fee for his surgery is N5m and I cannot afford it. I lodged complaints at the company on April 29, 2022, requesting help to fund my son’s medical bills, but its representatives did nothing. Due to the delay, his hand needs to be amputated.

“I reported the case at the Ibafo Police Station, and the police told me to return to the company to tell them to foot the bill, but the company is not ready to help.

“My son has been hospitalised at the Igbobi Orthopedic Hospital and the company has not sent anyone to check on him. I want the company to provide funds for his surgery before it affects his elbow joint.”

A relative of the victim, Samson Oguntola, said Grace informed him that the company blamed Daniel for the accident, adding that the widow had been looking for funds for treatment.

“Daniel just finished secondary school; he was trying to earn a living when the accident happened,” he added.

A supervisor in the company, Olatunde Abiodun, said the management was making efforts to fund Daniel’s medical bills.

He said, “We donated N50,000, which we released N40,000 for his treatment and then we gave the remaining N10,000 to his mum for upkeep. The management followed Daniel’s mother to the hospital.”