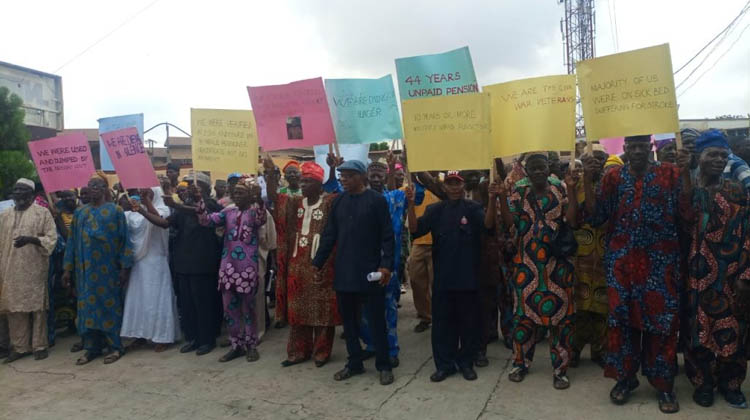 About 200 ex-military men who fought on the side of the Nigerian Government during the Nigeria-Biafran War, on Wednesday, staged a protest to register their anger over the non-payment of their pensions in the past 44 years.

The aged men and women, armed with placards with various inscriptions to show their agonies, called on the President, Major General Muhammadu Buhari (retd.), to look into their case.

The retired soldiers took off from the Nigerian Legion Secretariat in Ibadan and marched through Yidi, Gate through the NTA area, singing as they moved through the streets.

Operating under the umbrella of the First Intake Able Voluntary Retired Or Discharged Ten Or More Years in Military Service, the National Coordinator, Pa Babawande Philips, who addressed journalists, said it was ungodly and wicked to have paid former Biafran soldiers and abandoned those of them who fought on the side of Nigeria.

Philips said the ex-military men served directly under Buhari when he was in the military, saying he was sure that their former boss was not aware of their plights.

He said, “We have been denied our pensions for the past 44 years and we have done everything to make them pay us but to no avail.

“We have been to court and they asked us to drop the case. They called us for biometrics but to now say they will not pay us because we didn’t spend 15 years in the army is wicked.

“There is a memo of 1977 by the military government that those who spent 10 years and above should be paid pensions. If they are not aware of this, they should search for the memo.”

The secretary of the association, Joseph Popoola, said many of the members had died.

He also appealed to Buhari to intervene in their case so that they could be paid.